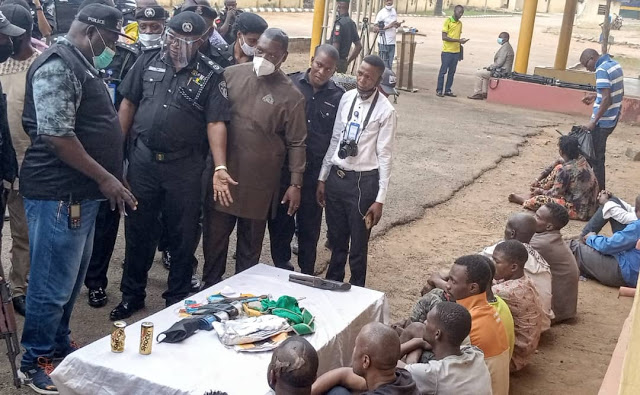 The Nigeria Police Force Ogun State Command,parraded some suspected criminals for various offenses in the state.

The state Commissioner of Police,CP Edward Ajogun said while parrading them before newsmen,that the state will not accommodate any form of criminality in any part of the state.

He said a duo of Chidi Umeh and Obinna Onyebushi were arrested for snaching motorcycle after drugging their victims with mixed energy drink.

The police boss said,”the suspects were apprehended after a tip off,when they got another victim.The suspects who were spare parts dealer in Nnewi,Anambra state, normally stop a commercial motorcycle ridder for a charter with good offer of payment.The ride is always delayed at a cool spot or secluded place where the motorcycle owner will be offered an energy drink that is laced with a sleeping pill.Once it is taken,the bike rider will sleep off while they will vanish with the motorcycle.”

Other suspects also parraded include one fake pastor who collected the semen of his friend after eating a boiled egg which was prepared for fortification.The victim (who slept off after eating the egg) was mastubated by the suspect,and his semen was collected.

The victim reported to the police when he realized that he lost erection after the incident.Though,the suspect denied using the semen for anything,and could not provide any explanation for the loss of erection,the police said he will be arraigned soon for the crime.

The police boss have implored the public to be law abiding,and report all criminal activities in their community.