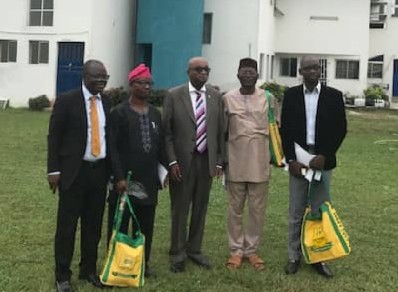 PR Primus, the promoter of a public relations project, “Your lmage” on the Ogun State Television has expressed its interest to partner Crescent University, Abeokuta for the promotion of the institution’s success story.

This was unveiled by the Managing Director of PR Primus, Mr Akin Okudero during a courtesy call on the vice chancellor of the University, Professor Ibraheem Gbajabiamila.

Okudero,a public relations veteran and one-time Chairman of the Ogun State Chapter of the Nigerian Institute of Public Relations (NIPR) congratulated the vice chancellor on the top-notch alumni produced by Crescent University, Abeokuta over the years.

Accompanied by another public relations veteran, Mr Dara Adebimpe and an ace broadcaster, Mr Nuraen Bakenne, Okudero said “Your Image” was poised to promote the noble achievements of Crescent University.

Welcoming the team earlier, Prof. Gbajabiamila informed that the founder of the university, His Excellency, Prince Bola Ajibola was propelled to contribute his quota to the development of education in Nigeria by producing alumni with academic and moral excellence.

The team also visited the Department of Mass Communication where they had a chat with the head of department, Dr Kola Adesina.

Welcoming the team, Adesina informed that Crescent University had made many giant strides through its alumni ” who now perform excellently in further studies and employment.

He served the team with a catalogue of publications done by students of the department.

Adesina added that all the first-class products of university had either been fully engaged by employers, started their own entrepreneurship or proceeded on further studies.