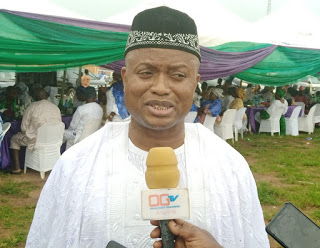 The city of Ilaro in Yewa South in Ogun state played host to prominent men and women from all works of life yesterday during the fidau prayer of late Alhaja Sideeqot Haruna,the mother of famous socialite,Alhaji Waidi Haruna, popularly known as Wadoye.

Alhaja Haruna died at the age of 96,she was a mother not only to her children but to her community at large.

The colourful fidau prayer kick started with an opening by the league of Imams and Alfas led by Chief Imam of Ilaro, Sheikh Tajudeen Mustapha-Adewunmi.

The event was full of praises and gratitudes for a life well spent of the deceased, especially her contribution to the lives of many who came across her,the community at large.

Chief Wadoye,the Bobagunwa of Ilaro thanked God for a life well spent by the deceased,and said he would soon inagurute a foundation in her memory.

He said,”my mother will be missed so much.She is a giver,and she loved making people to be happy by meeting their needs, especially the less privilege and people around her.

Alhaji Haruna,who is the CEO of Wadoye Express Limited also described his late mother as a peace loving woman whose words of wisdom cannot be quantified.

He also added that, her philanthropic gesture towards the less privileged in the society was a source of inspiration for so many people.