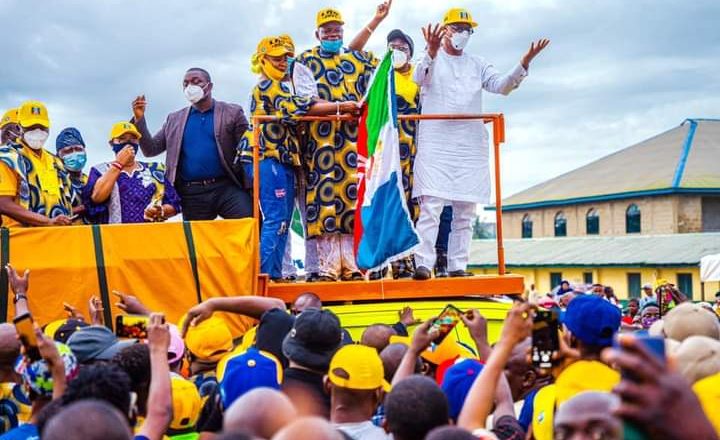 Ogun State Governor, Prince Dapo Abiodun, has disclosed that the Federal Government has approved the sum of N79 billion for the reconstruction of Ilaro-Papalanto-Sagamu Expressway in support of the state’s efforts on infrastructural development.

Governor Abiodun revealed the Information while addressing the people of Yewa South in Ilaro, noting that the road is 100 kilometers long and the reason the reconstruction will cost N79bn.

Adding that the road crosses through Obafemi-Owode, Ewekoro, Yewa South and North local government areas, Prince Abiodun explained that the road is a major arterial route that links the State with other states and the ECOWAS sub-region.

He also called on the people of the local government to come out in large numbers and vote the APC chairmanship candidate, Lateef Salami and councillorship candidates during the July 24 poll.

Speaking earlier in Ipokia, Governor Abiodun assured that his administration would soon take a decision on the viability and sustainability of the Ogun State Polytechnic, Ipokia, which was established by the immediate past administration.

Abiodun, who declared that the idea behind the establishment of the institution was a good one, disclosed that the circumstances that led to its establishment, viability and cost would be taken into consideration, before the state government takes a stand.

The governor who had earlier visited the site of the institution, situated in Oke’ebo Area of Ipokia town, said the school was among projects reviewed by the committee set up to review all projects, but not completed by the previous administration.

“We have appointed a committee to review all the projects that were ongoing but not completed by the previous administration and this project was reported amongst others.

“Now that we are here and we have seen it, we will go back and take decision. Government is a continuum and this administration has pledged that every commonwealth of ours that was invested in any project, once that project is of socio-economic importance to our people, we will ensure its continuity”, Abiodun noted.

He pointed out that his administration met a chaotic situation where the polytechnic was moved to Ipokia to give way to the proposed Moshood Abiola University of Technology, Abeokuta, expressing unhappiness that neither of the two Institutions got accreditation to begin operations.

“When we assumed office, Ogun State Polytechnic was not in session as it was meant to be relocated to this premises and the facility meant to become the Moshood Abiola University (MAUTECH) which neither had gotten accreditation was not operational, the same with this polytechnic. Thank God, we have been able to resolve that of the Moshood Abiola Polytechnic and it is up and running”, he added.

The governor said seven buildings including a proposed 750 seater hall, two proposed 300 lecture theatres, an administration building, two hostels and two classrooms were the only structures his administration met on ground at the polytechnic.

Abiodun, however, disclosed that he had earlier sent an inter-ministerial committee to inspect facilities in the institution, access the level of completion, suitability and readiness for use to enable government take an informed decision to the benefit of the people of the state.

“The facilities are still at a stage where they go can’t be used; I don’t know why anyone will close the Moshood Abiola Polytechnic and move them here to Ipokia when the site was not even ready.

“I saw everything that was there, it is a polytechnic they wanted to give you, in my mind, Ipokia deserves something better than a polytechnic. I urge you to leave it to me, by the grace of God, we will complete the institution for the benefit of all the people of Ipokia and the state”, Abiodun said

The governor said that no fewer than 54 projects had been completed in Ipokia, noting “we have done 325 projects in two years throughout the state”.

On the Afa bridge in the council area, Abiodun pledged to complete it as promised during the governorship campaign in 2019, adding the bridge, when completed, would boost the socio-economic development of the area.

“The bridge remains an ongoing project but requires a lot of extensive work in terms realignment of the road itself, elevation of the road surface and a lot of civil works. We realised that it was important to bring the needed succour and needed relief to the people of Ipokia.

“We have an inbound and outbound lanes that had been properly asphalted, each of the lanes are two and this has brought immediate succour and relief to the people of Ipokia in the medium term”, the governor submitted.