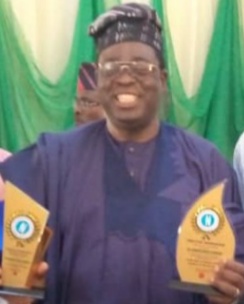 The Publisher of Prestige Newspaper celebrated 29 years anniversary as awards were given to outstanding achievers and public functionaries in different fields.
The Publisher,Mr Dada Olaonipekun,a veteran Journalist of repute, expressed joy and gratefulness for continuous support and encouragement to go this far.
The event that was held at NUJ Press Center,Iwe Royin Abeokuta Ogun state also featured health talk on hypertension.

The State Commissioner for Agriculture,Dr Samson Odedina was given Award of Excellence Best Attitude in Media Relation.The Commissioner was appreciated for his tremendous efforts in the Agricultural sector of the state,and how he had made it a viable Investment that brought development to different communities.
Other awardees were Dr(Mrs) Ayodele Olubunmi Womiloju as Most Outstanding Woman of the Year,Yinka Adegbite,Best Public Relations Professional of the Year,Kazeem Olowe, Most Outstanding Reporter of the Year(Broadcast Media),Daud Olatunji,Best Reporter of the Year (Print)Male Category,Princes Olayinka Olukoya,Best Reporter of the Year (Print) Female Category and many others.