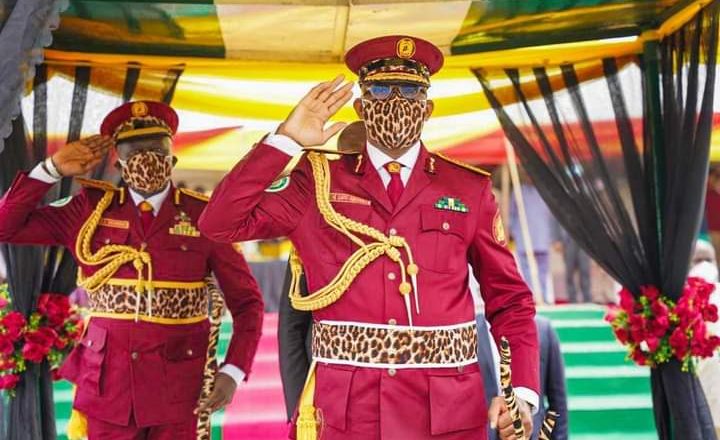 …SAYS OUTFIT NOT IN COMPETITION WITH POLICE, OTHERS

Ogun State Governor, Prince Dapo Abiodun has inaugurated the state’s wing of the South-West Joint Security Outfit known as, “Amotekun”, with a declaration that the outfit was not meant to compete with other security agencies, but to further strength the security apparatus of the State.

Speaking at the inauguration of the Amotekun at the Arcade Ground, Oke-Mosan, Abeokuta, Governor Abiodun, who decorated Nobel laurate, Prof Wole Soyinka as “the Super Marshall of Amotekun Corps”, noted that the security challenges facing the State and the nation as a whole, needed the cooperation of all Nigerians and security agencies who should work in harmony and not unnecessary competition.

Said he: “Let me note that the inauguration of the Amotekun in Ogun State in not to create unnecessary competition with other security agencies in the State. And this is why everybody must work together to further strength security of lives and property in the State.”

He recalled that the establishment of the joint security outfit was agreed on by leaders and governments of the six south west states in June, 2019, as part of holistic approach towards tackling the rising wave of insecurity in the region.

Governor Abiodun disclosed that the delay in the establishing of the out in the State was borne out the need to be meticulous and inclusive by allowing the people participate in decision-making process that affect them.

“We cannot but factor our economic status and other peculiarities into any security machinery we want to put in place. That is why operation of the Amotekun in Ogun State looks like a delay. For us, it is never a delay; it was a calculated and methodical process in thoughts, action and to ensure a hitch-free service delivery”, he explained.

The Governor said the operatives have been careful selected, trained and equipped with necessary logistics, technical backstopping and political will for effective take off and operation, noting that the State expect nothing, but the best performance from them.

While urging men and officers of the security outfit to operate within the ambit of the law establishing it, the State helmsman, charged them to make their impact felt by co-operating with other security agencies to protect lives and property of the people of the State, calling on the people to give needed information to the outfit to serve them better.

The Governor who regretted that insecurity rising from the farmer/herders clashes, have led to loss of lives in some parts of the State, reiterated that no part of Ogun State would be a safe-haven for criminals and criminality in whatever form or guise. He admonished those with criminal tendencies to have a rethink as the State would not be a home for criminals.

“Any property found to be serving as hideouts to criminals will not only be taken over by government, but such facility will also be demolished. Whoever is found to be harbouring kidnappers, ritualists, robbers or any criminals will be arrested and handed over for prosecution”, the Governor warned.

He said a taskforce, made up of the military, Nigeria Police, Department of State Services, Nigerian Security and Civil Defense Corps and the Vigilante Groups, has been set up as a quick response mechanism, particularly, to the troubled parts of the State to maintain law and other.

Speaking on behalf of traditional rulers, the Alake of Egbaland, Oba Adedotun Aremu Gbadebo, said though Ogun as one of the safest states in the country, much needed to be done to make it the safest, calling on security agencies to share intelligence report to rid the State of crime.

Nobel Laureate, Prof. Wole Soyinka in his good will message, noted that the Amotekun was not created to replace other security agencies. He urged the Amotekun operatives not to trample on people’s rights, but to assist and protect them at all times. He also warned that their activities would be closely monitored.

The State Commissioner of Police, Mr. Edward Ajogun maintained that a lot of ground needed to be covered in the war against crimes and criminalities in the State, while the Director-General, Development Agenda for Western Nigeria (DAWN) Commission, Mr. Seye Oyeleye, pointed out that the Amotekun was a child of necessity and not a regional army, formed to provide security in the South West region, saying it is “community policing at its best”.