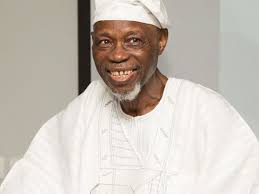 “What is required in life is more than the mundane activities of caring for our family and ourselves alone.Animals too,do that.To those who are privileged and blessed to do,life needs value added contribution”

These are the words of His Excellency, Prince Bola Ajibola renowed legal giant,popular philanthropist and humanist who had been an inspiration role model to many all over the world.As he marked his 86th birthday recently,it is obvious that the zeal to bless humanity is still with him.
The Owu born Prince is a blessing to the world in general as he had served humanity in different capacity.During his legal career,he got to the apez of the legal profession when he was appointed at different capaiof the international legal bar.Prince Ajibola joined the International Court of Justice at Hague, Netherlands in 1991.After three years at the World Court precisely in 1994,he further served as Judge Ad Hoc of the World Court from 1994 to 2002.He was appointed judge of the Constitutional Court of the Federation of Bosnia and Herzegovina.He also served as the Nigeria High Commission to the United Kingdom between 1990 and 2002.
Prince Bola Ajibola had trained and nortured many successful legal professionals home and abroad, expecially during his active legal practice.In Nigeria he made a great inpact at the bar which gave him the opportunity to become the president of Nigeria Bar Association (NBA)in 1984-1985,and Attorney General/Minister of Justice in 1985-1991.
The legal icon also founded Islamic Mission for Africa in 1996,which gave birth to Crescent University Abeokuta,an initiative that has being building generation of graduates that are well inquiped, industrious,moral upright and diligent in their various field.
The living legend was also awarded with Commander of the Federal Republic of Nigeria(CFR), Knight of the Order of British Empire (KBE),and many others.
In adding value to life,Prince Ajibola have in different times sat at the board and direct the affairs of many organization both home and abroad.He also belong to many non-governmental organization, Senior Citizen Care Foundation is one of such
Prince Bola Ajibola is the chairman of Senior Citizen Care Foundation and a plays a prominent role in reaching out to elderly in the state and outside the state.He has touched so many lifes,and he is a point of reference in care of the elderly and senior citizens in the country.
Baba as he is fondly called,is a blessing to the world an unexpected common personality that deserves celebrating.
We wish baba happy 86th birthday and many more years of good health and sound mind