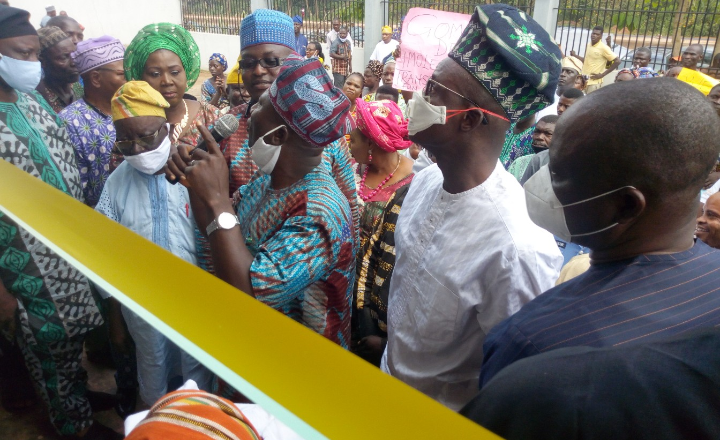 The Governor of Ogun State, Prince Dapo Abiodun has commended the Local Government Area Transition Committee Chairmen for judicious use of grants made available to execute projects in their various local councils.
The Governor, who gave the commendation during commissioning of projects at Ogun Waterside and Obafemi-Owode Local Government Areas of the State, noted that some of them added part of their Internally Generated Revenue (IGR) to make sure that the councils are no longer just what it used to be in the last view years.
He said, the performance of the Chairmen have been encouraging, seeing all the projects they have executed in the first phase of the exercise. “I am greatly encouraged with what I have seen so far. Though this administration gave the grants, yet they have displayed a level of brilliancy in making judicious use of the funds given to them. I am very sure that the second phase will be far greater”, Governor Abiodun said.
In their welcome addresses the Chairmen Transition Committee of the two councils appreciated the Governor for the opportunity given to be among those, who would put smiles on the faces of the people in their Local Government Areas in the State.
Ojotumoro of Abigi, Oba Barr.Olusegun Ogunye appreciated the Governor for the timely intervention of river dredged which prevented some of their communities from flood.He said the people of Abigi are already enjoying the impacts of the present government in the Local Government Area, adding that the projects and programmes of the Governor Dapo Abiodun-led administration are already speaking for it.
Senior Special Adviser to the Governor, Rt. Hon. Tunji Egbetokun in his goodwill message, enjoined the people of Obafemi Owode to guard the facilities made available for them by the government assuring that the road that leads to the Oyebola community would soon receive government attention.
The projects commissioned at Ogun Waterside includes: construction of 12 Lock-up shops at Abigi Market; renovation of Executive Building in the Local Government Secretariat; solar boreholes at Awopin, Olojumeta and Ayila communities and cutting of road verges from J4 to Ibiade, while Obafemi Owode renovated maternity Healthcare Centre at Adedero; built a block of two classrooms, toilet and store at Oyebola village and a block of two classrooms, toilet and store at Siun.