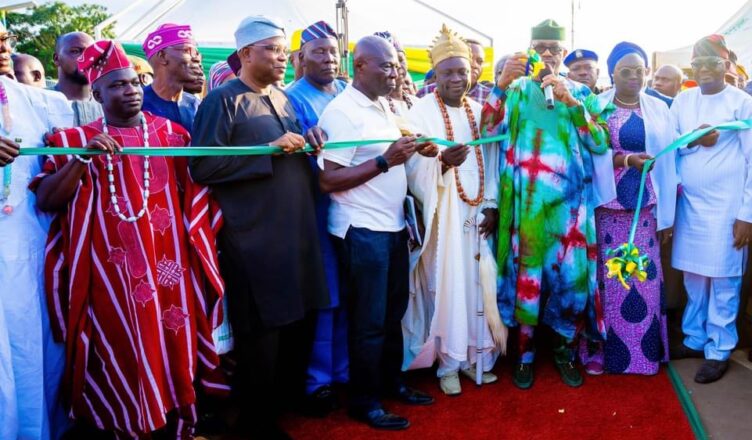 Ogun State governor, Prince Dapo Abiodun, earlier today, inaugurated the 2.4km Oke-Ola Road in Imeko-Afon Local Government Area, declaring that his administration has moved from the era of ground breaking to period of projects commissioning across the state .

Speaking at the event attended by top political functionaries, party stalwarts and traditional rulers, Prince Abiodun noted that the road is strategic to the economic development of the Ogun West Senatorial District and the state in general.

“We have gone beyond the era of ground-breaking, this commissioning is therefore a departure from the past as it is the first to be done in Yewaland in many years.

“The Paramount Ruler of Yewaland, Oba Kehinde Olugbenle always say all the previous administrations used to do was to come to Yewaland to do ground breaking,after which they never commissioned. And I said to Kabiyesi that by the grace of God, we are going to break that jinx and today is an historic day not just in the history of this state, but in Yewaland.

“This administration is three years and four months in the saddle, it has started that process of commissioning roads and we have started right here in Imeko-Afon LG”, he stated.

Abiodun said that the road project is another symbolic demonstration of his administration’s approach to a strategic, methodical and systemic development of Ogun State.

He noted further that the road means many things as it is a deliberate approach towards providing a smooth interconnection between the food baskets, industrial hubs and the neighbouring states.

“Ogun State remains the biggest producer of cassava in Nigeria, and one of the largest producers of maize in Nigeria. Imeko/Afon is one of the reasons we take that vantage position. This same Imeko/Afon is also the host of the Oodua Groups Investment Company Limited Cassava Cultivation and Processing Project at Imeko, and some farm settlements. Just a few metres from here is the farm settlement at Oha village”, he noted.

The governor who described the town as agricultural hub of the State, posited that the Oke Ola road would also serves an inter-state road which connects to Oyo State through Malete town, and help in improving security apparatus along the various border communities in the axis.

“We cannot forget that Imeko/Afon is also a window into the expansive corridor of West Africa, therefore, this road is multi-purpose. On one hand, it is a township road that adds to the aesthetics of Imeko town.

“On the macro economic plane, it is a boost to our agricultural and industrialisation agenda as it connects our farm settlements with the Oodua Groups facility. It is also an inter-state link and an international access road, therefore,  the road further stamps the vantage position of Ogun State as truly a Gateway State”, Abiodun said.

He added that his administration is committed to making Ogun a truly investors first choice destination, not only in Nigeria, but in Africa, reiterating that his government would continue to do a lot of work on job creation, poverty alleviation and food security.

“We will continue to demonstrate our commitment in the development of partnership with our people in education, health, infrastructure, commerce, youth development, agriculture and other key sectors that have direct and positive impacts on our people.

“Let me call on all relevant stakeholders to continue to cooperate with us. As development partners in the Ogun State project, we will walk this path to glory and achieve the Ogun state of our collective dream”, the governor stressed.

While thanking the people of Imeko Afon LG for their support, the governor reiterated the  commitment of his administration to an inclusive, equitable and fair development and distribution of amenities to all parts of the state, submitting that “any project that has any clear line of service and benefit to the people of Ogun West would be given prompt attention”.

In his welcome address,  the Commissioner for Works and Infrastructure, Akin Akinsanya, while noting that the road was constructed on record time, said it would impact positively on the economy of the town and provide unhindered access to the neighbouring state.

The Onimeko of Imeko, Oba Benjamin Olanite, appreciated the state government for coming to the aid of the town which has over the years been neglected by previous administrations.

He said the town apart from being a spiritual town, it has agricultural potentials and called on the state government to invest more on the infrastructural needs, particularly renovation of the oldest school and the palace road in the town.

In his remarks, Professor Emeritus of History who is also an indigene of the town, Anthony Asiwaju, lauded the governor for keeping to his electioneering promises, declaring that the governor has written his name gold with the road construction.

Speaking in an interview with newsmen, a trader in the town, Mrs. Ganiyat Olatunji, expressed happiness that the road has been fixed by the present administration, saying apart from helping their business to grow, it would accelerate social development of the town.

Also, a commercial motorcycle rider, Samuel Ayorinde, said that the construction of the road would increase their income as the damage done by the bad road to their motorcycles would be greatly minimised.