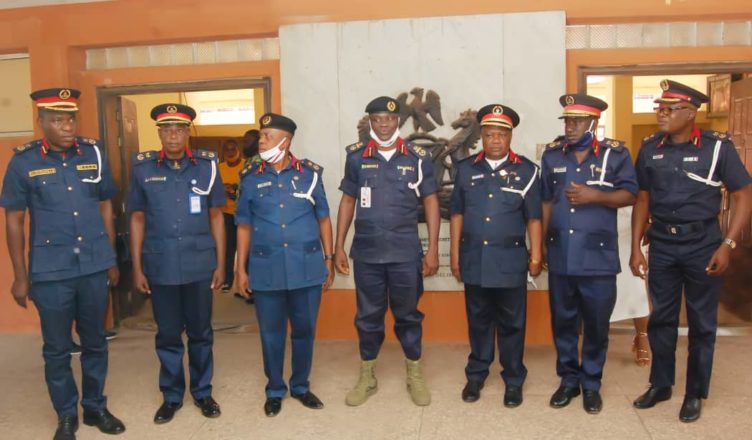 The newly promoted Senior Officers of the Nigeria Security and Civil Defense Corp,have been charged to see their promotion as a call to service,to the upliftment of the Corps.
This call was made by the Commandant General Abdullahi Gana Muhammad, represented by Assistant Commandant General,Zone F, Commandant Shem Sunday Obafaye,today in Abeokuta after the official decorations of six senior officer to the rank of Commandant.
He said the promotion came as a result of their hard work and selfless service to the Corp,which is also a call to do more.He added that for those who are yet to be promoted,it will soon come to past.
The NSCDC boss who was filled with joy said,”I am very happy today, because I am the chief celebrant of today.I have 2 Assistant Commandant General promoted at my Zone,and 6 Commandants,it is a thing of joy to me.It is also a call to do more.It is expected that to who much is given,much is expected.It is an inducement to do more.”
One of the promoted officers, Commandant Akintelure Niyi was filled with joy and happiness, appreciated the Corp for the timely promotion.He said the promotion is a call to do more, encouraging other officers to look forward to such a day which he believed,would come.
Also, Commandant Aboki Asishana and Commandant Osuala Edwin who were also promoted expressed delight at the event and promised to do more for the Corps.