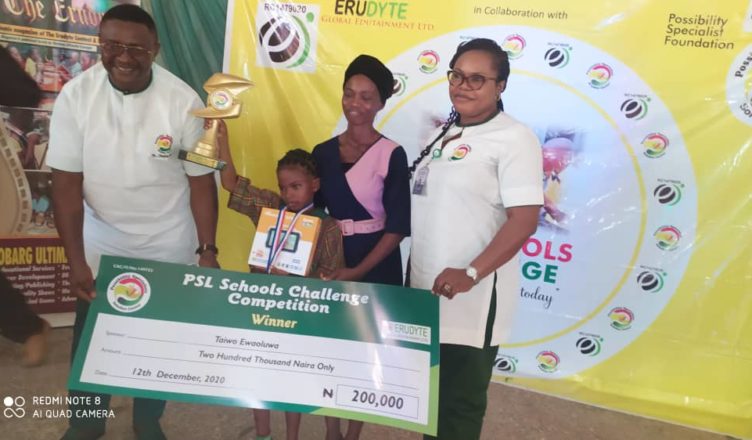 The Possibility Specialists Foundation (PSL) has extended its hand of support to development of education in Ogun State giving scholarships to three primary school pupils who emerged victorious from its 2020 School Challenge Quiz and Talent hunt competition.

Although, these monetary prize would not be handed over to the pupils but kept in PSL empowerment scheme where for 15 months these pupils will be collecting 20% of their various cash prize monthly for 15 months.

The winners of the scholarships were also presented with educational tablet worth N28,000 each while solar powered lamp were given as consolation prizes to all who participated in the competition. There were also winners in dancing and singing category from Treasure land School, Ijebu-Ode

According to him, “PSL support funds is meant to activate an empowerment fund in PSL which will be channeled towards the child’s tuition by the way of bursary.

“The monthly empowerment funds will be remitted through the parents or guardian of the beneficiaries or paid directly into the child’s bank account. The qualified pupils are expected to maintain good grades, and high academic standards not less than 70% performance during the quiz”.

Mr Egona encouraged them that he was once like them and a old student of Ijebu-Ode Grammar School where the final was held. According to him,they are the future of Nigeria and requires adequate attention to succeed and be great. He assured that PSL will take the exercise to national level to affect more lives in our country Nigeria.

Mrs. Helen Okon, proprietress of Trinity Kiddies Academy lauded PSL for its interest in supporting the education sector saying that any organization supporting a cause of education deserved all the accolades because such organisation is interested in pushing for the country’s advancement.

“I love the courage put in by the organisers of this programme. it’s an event to showcase the accountability of our children. it’s also to showcase the ability of the school, what the school has been imparting on the children. Being the first time of hearing about PSL, I can assure you that I want to be a part of the foundation. I want to give back to the society”.

In the same vein, President of the Erudyte Global Edutainment and collaborators of the event, Mr ‘Seyi Sowunmi also described the event as one designed for schools in Ijebu-Ode to identify academics champions commending PSL for its thoughtfulness.