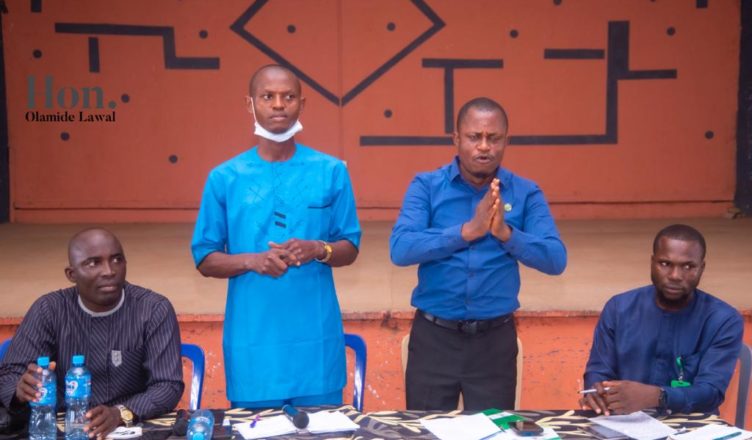 The Special Assistant to Ogun State Governor on Youth and Sports, Comrade Olamide Lawal has called for Peaceful resolution of all conflicts lingering in the Sagamu Local government chapter of the National Youth Council of Nigeria.

Comrade Lawal gave this advice at a meeting held with aggrieved groups within the Chapter.

At the meeting held in Sagamu, the Governor’s aide maintained that ” there is a need for us to respect other people’s opinion, so that peace can reign”.

“Everybody has right to express his or her opinion, and on behalf of the governor, I have come to implore you to ensure continuous peaceful co-existence, so as to foster unity and development”.

He furthered, “In line with the slogan of the NYCN, ‘build the youth, build the nation,’ when the youths are developed, the nation will definitely be developed”.

It would be recalled that the Sagamu local government chapter of the youth Association has been enveloped in months of crisis which had led to the disability of the council to hold election into leadership positions.

The state House of Assembly committee on Youth and Sports had also insisted that the state chapter devised a method of conducting the election in no distance time.

Comrade Lawal, with a desire to ensure an all inclusive approach to resolving the conflicts, commended the matured nature which the aggrieved factions had raised their petitions solicited more intellectual struggle, devoid of physical protests and hooliganism.

He advised all factions to do away with tribal and ethnic differences in a quest for unity among all youths.

“We must continue to preach peace, Nigeria is where it is today, because of ethnic differences that is tearing us apart. Sagamu is one and it should be seen as one.” Lawal noted.

In his address, the State Chairman of the National Youth Council of Nigeria, Comrade AbdulJabaar Ayelaagbe, urged the youths to be law abiding and peaceful in their conduct.

He assured them of a free and fair electioneering process that would be acceptable and transparent to everyone.

He thereafter set up a five member electoral committee to oversee the process on Saturday 24th October, 2020.