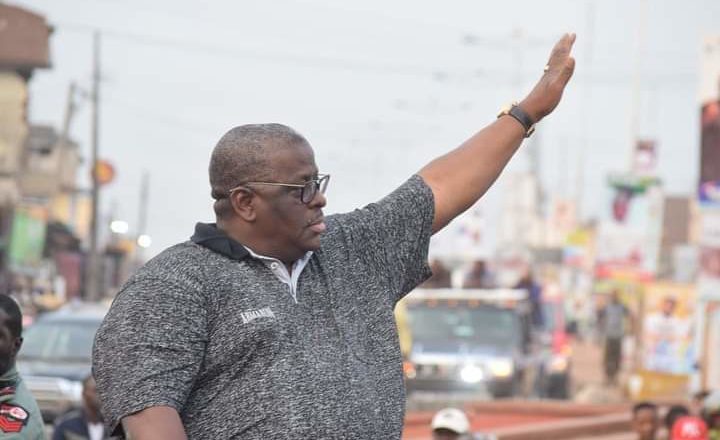 The Shodipe Kashamu family of Ijebu-Igbo, Ogun State, said the burial of Senator Buruji Kashamu will come up by 12noon today in accordance with Islamic right.

The body of the late senator arrived his home town yesterday night with political associates and loyal crowd.The family made the official statement through the media aid of the deceased,Austin Oniyokor.

Chief Olusegun Obasanjo also sent his condolences to the government and the family as he described the late senator as a great political asset to the state and country at large.

He said,”I received the sad news of the demise of Senator Esho Jinadu (Buruji Kashamu) a significant citizen of Ogun State.

Please accept my condolence and that of my family on this irreparable loss.

The life and history of the departed have lessons for those of all us on this side of the veil.

Senator Esho Jinadu (Buruji Kashamu) in his lifetime used the maneuver of law and politics to escape from facing justice on alleged criminal offence in Nigeria and outside Nigeria. But no legal, political, cultural, social or even medical maneuver could stop the cold hand of death when the Creator of all of us decides that the time is up.

May Allah forgive his sin and accept his soul into Aljanah, and may God grant his family and friends fortitude to bear the irreparable loss.”

He said,“ Death, once again, has robbed us of the contribution of an enigmatic politician of the PDP, who represented Ogun East Senatorial District at the 8th Senate, our dear brother Senator Buruji Kashamu. Although we belonged to different political persuasions, and disagreed on most issues, Senator Kashamu will nonetheless be remembered for his assertive presence in the political arena and uncommon doggedness. He fought myriad of wars with every breadth in his soul in the defence of whatever he believed in and for his personal freedom. Hate him or love him, he could not be easily ignored”

Senator AMOSUN prayed that the Almighty Allah, swt, will forgive Kashamu’s earthly sins and give him eternal rest. He expressed condolences to the nuclear and political family members of the late founder and financier of the Omo Ilu Foundation, the Ijebu Igbo Community, and Ogun State as a whole.

The governorship candidate in last general election, Gboyega Nasir Isiaka expressed shock over the death of Buruji Kashamu.He said,”Senator Kashamu was a friend, brother, associate and benefactor in my political journey, especially the 2015 general elections; an act I remain eternally grateful for.

Prince Buruji Kashamu was many things to different people; but he was compassionate and humane . He genuinely cared for people as evidenced in his inimitable charitable gestures to the less privileged all through his lifetime.

His death is not only a personal loss, it is a great loss to Ogun State and Nigeria in whole. Indeed, it is the end of an era; one which will be talked about in our political history for a long time.

I pray God to forgive the soul of the deceased, comfort his bereaved family, console all of us and reward his noble deeds with Aljanah Fridaous.”

The formal governor of Ogun Otunba Gbenga Daniel also expressed shock at the death of Buruji Kashamu,as he described him as a great loss to the state and the nation at large.

He said despite their political differences,Kashamu will be greatly missed in the political climate of the state.