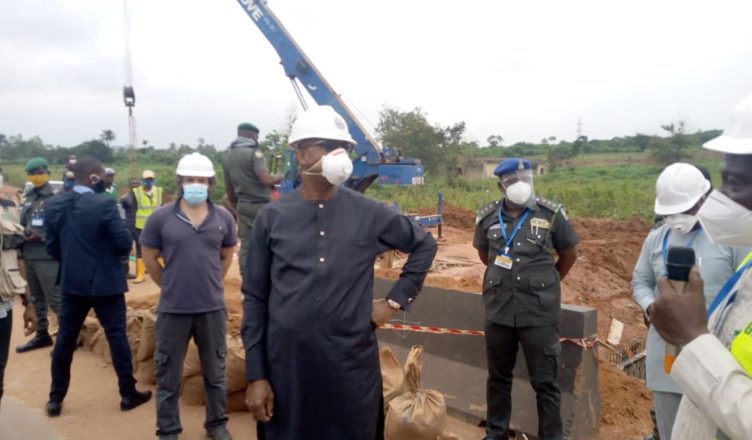 The road which links, Ogun to Lagos, Nigeria’s commercial capital and the Eastern parts of the country, he said was designed to bolster the economic potential of Ogun State.

Being a link road between the State and Lagos, which is the nation’s commercial capital, he said: “This corridor no doubt will be a big economic haven.”

Abiodun while assuring the people that his administration would not abandon any of its project, noted that the Ijebu-Ode-Epe express road which was flagged off in February this year, was expected to be completed early next year, but however regretted that it might not be visible due to the Covid19 pandemic, promising that the road would be commissioned in the second half of next year.

Governor Abiodun said he is not unaware of the hardships being faced by commuters across the State. While calling for patience, he assured that some of them will soon be a thing of the past. “Efforts are in top gear to put the pains to an end. We are redesigning and prioritizing roads because there is simply no alternative to good roads if we are to grow the economy”, he said.

Gov. Abiodun will also serve the purpose of easy access for commuters in and outside Ogun State, notwithstanding the challenges of the raining season. “I have since directed the Ministry of Works to come up with what we can do on this road as palliatives to ensure that our people do not suffer unduely. I want to say that I feel the pain of our people, I share their pain, but they should be rest assured that we are on top of the situation. You will soon begin to see active work on this road and it is not a project we will start and later abandon,” he said.

According to him “those road projects will not just be something on photoshop, not something we’re going to start and abandon but rather complete it to ease the hardships being faced by the people”

The Governor contended that parts of the developmental projects cutting across all the strata of the State economy are over 80km road projects embarked upon in just one year of the administration while over 20km have been completed.

“I believe that if my memory doesn’t fail me, I do not know any administration in Ogun State that did such in just one year,” he contended.