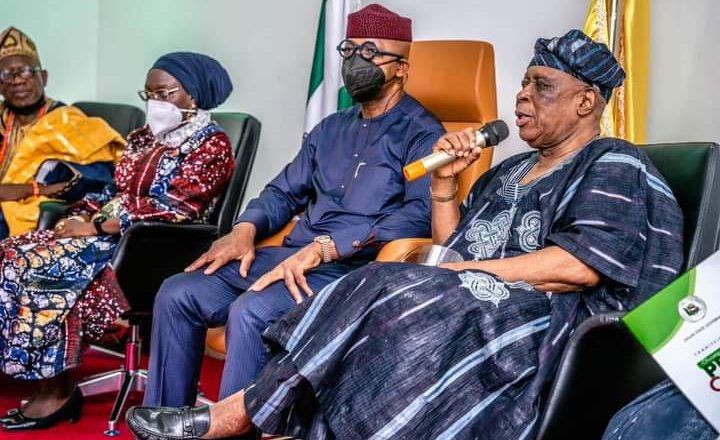 The Former governor of Ogun state,Aremo Olusegun Osoba has described the period he left office till 2019 when the present administration came onboard as the most traumatising years of his life.

He made this known today during the official commissioning of the “Olusegun Osoba Press Centre”at the governor’s office in Okemosan Abeokuta.

Aremo Osoba said,”I am full of joy today that I’m honoured at the same place where I was so frightened to visit for 16 years.I am delighted with beautiful remarks from colleagues and veterans who have honoured this event with their presence.”

The former presidential spoke person and media guru,Dr Reuben Abati in his remark described Aremo Osoba as a blessing to the state and the nation at large.

He said,”Aremo Osoba has made a remarkable achievement in journalism and politics,with his knowledge and outstanding memory of events.He is the only two term governor produced by this state who was a Journalist and still a Journalist.Naming this press centre after him is a well deserved honour, expecially in his life time.”

Dr Abati commended the state governor,Prince Dapo ABIODUN for a promise kept with the provision of a befiting press centre for the men of pen profession to aid effectiveness in their discharge of duty.

The Commissioner for Information and Strategy,AbdulWaheed Odusile described Aremo Osoba as an ambassador and a gift to the state, and the nation at large.He said Aremo Osoba is an household name known for professionalism and exploit in the media world.”

Odusile appreciated the governor for the provision of the press centre and his commitment towards a good media relation in the state.He promised to engage the media practitioners in developmental journalism towards effective information management in the state.