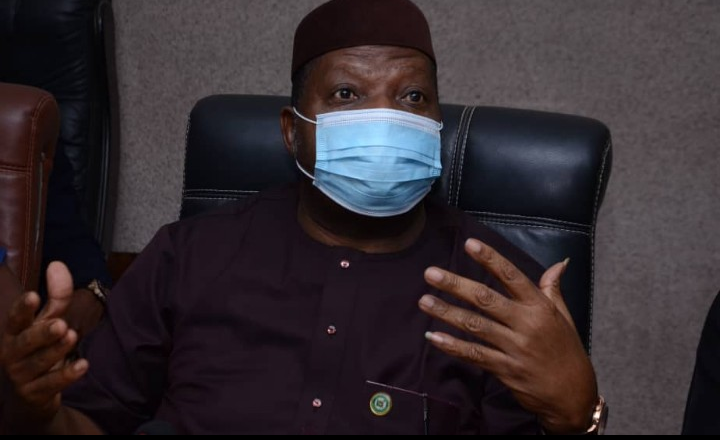 The Speaker of the Ogun State House of Assembly, Rt. Hon. Olakunle Oluomo has appealed to the State Chapter of the Parliamentary Staff Association of Nigeria (PASAN) to allow for further engagements between the Conference of Speakers of State legislatures and the Nigeria Governors’ forum on the modalities for the seamless implementation of financial autonomy for State legislatures.

Oluomo made the appeal today, while addressing the leadership of the Association in the State led by Comrade James Obanla, who led other Assembly workers to enforce the compliance of the directive of the national leadership of the association to embark on indefinite industrial action over the failure of the Governors’ Forum to implement autonomy for the State Legislature.

The Speaker explained that further engagements between the concerned parties became expedient to sort out grey areas, especially on the implementation process of the autonomy as pronounced by President Muhammadu Buhari through the Executive Order 10.

Recalling the previous meetings held with the representatives of the Nigeria Governors’ Forum including Governors Kayode Fayemi of Ekiti, Aminu Tambuwal of Sokoto, Simon Lalong of Plateau and Atiku Bagudu of Kebbi State at the instance of the Conference of Speakers leadership, Oluomo stated that the process would achieve desired result within the next two week which hopefully would lead to smooth the implementation in due course.

“The Governors agreed with us that the financial autonomy is a constitutional matter and they believe it must be so, but the area of disagreement is the method of implementing it, hence, we have submitted our proposal to them on how it could be done. They promise to take it back to their brother-governors and get back to us within two weeks, I believe that within this two weeks something tangible would be done”, Oluomo remarked.

Earlier in his address, the Chairman of the State Chapter of (PASAN) Comrade Obanla stated that the strike was as a result of the refusal of government to implement financial autonomy for the State legislatures as enshrined in the 1999 constitution (as amended).

He noted that the Assembly staff had to join the strike as ordered by the national body of the Association, saying that all activities would be grounded indefinitely, as the national body had earlier issued several notice to the government on the need to implement the financial autonomy signed into law by President Muhammadu Buhari without any action.

Speaking on the benefits of the financial autonomy, when fully implemented, he opined that the autonomy would enhance separation of powers and promote good governance through effective symbiotic relationships among the three arms of government.

“The strike is indefinite, the business among the three arms of government will be affected. Today’s plenary has already been affected and the stakeholders’ forum scheduled for tomorrow will likely to be affected too, ” he said.