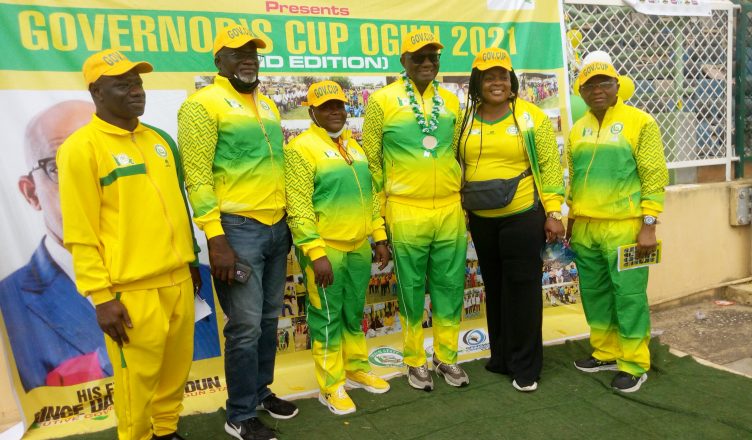 The Ogun State Governor,Prince Dapo Abiodun has assured the people of the state that his administration will continue to prioritize sporting activities in the state.
Prince Abiodun said sport is an integral part of youth development which should be given attention .
The governor gave the assurance yesterday during the concluding part of second edition of the State public primary schools sports competition, tagged; ‘’Governor’s Cup’’ final match, at the MKO Abiola stadium, Kuto, Abeokuta, saying youth development involved combination of academics, sport development and vocational training.

Prince Abiodun who was represented by his Deputy, Engr. Noimot Salako-Oyedele, emphasised the need to continually discover sports men and women in the State, as well as use sports to harness potentials in youths and improve their wellbeing,

“Our administration has worked tirelessly at ensuring sport takes the front burner among our children and adolescents. You will recall that the State government sent the State team to ‘Edo 2020’ and they performed excellently well’’, he said.

The Commissioner for Youth and Sports, Dr. Kehinde Oluwadare, said education was not only about books, grades and examinations, but also an avenue to develop psychomotor of students and their growing talents, noting that the State government would ensure youths in the State are actively engaged.

Also, Commissioner of Education, Science and Technology, Prof. Abayomi Arigbabu, represented by the Special Adviser on Education, Mrs. Ronke Soyombo, appreciated the Governor for the continued efforts in sponsoring the championship, saying sport was crucial to student’s growth and development, as it would improve their cognitive abilities and inculcate a sense of sportsmanship.

In his welcome address, the Executive Chairman, Ogun State Universal Basic Education Board (SUBEB), Dr. Femi Majekodummi, stated that the introduction of the competition by the Governor was part of his commitment to develop sport and talents particularly among public primary school learners in the State.