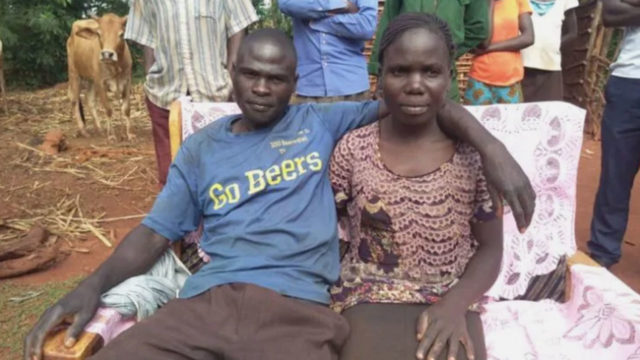 Two Kenyan women living in Busia country have left many shocked after reports that they swapped husbands in a bid to find happiness surfaced in the media.

The two women identified as 28-year-old Lilian Weta, a mother of three and 29-year-old Millicent Auma, a mother of two found themselves becoming online sensations after it emerged the two had traded husbands.

It is gathered that Auma was living with her husband Christopher Bwire in Siroba village, Matayos constituency before she walked out of the tumultuous marriage and moved in with one Kevin Barasa, a married man with three children.

Barasa at the time had been living together as a married couple with Weta for more than 10 years in Namwitsula, Butula constituency but were experiencing constant quarrels.

Weta told Standard Digital that her husband came back home one day with Auma, telling her he had a new wife. She said:

“Sometimes last month my husband came home with a woman in the evening and told me she was his cousin. He ordered that I cook for her and prepare where she would sleep.”

Upon interrogation, the supposed visitor who was wearing Barasa’s jacket threatened her with a knife and boldly informed her that the house now belonged to her and she should leave.

“They came in at around 1am with my husband and she (Auma) told me that night she was officially the wife.”

When Weta confronted her husband, he told her to go look for Auma’s husband and marry him. Weta thought of their constant quarrels and decided she had had enough as she summoned the courage and left for Matayos in search of Bwire.

“My husband told me to go look for Auma’s husband and marry him. I asked him if he would be comfortable with me finding a new husband. He said yes.”

Weta called her brother and sister to tell them what had happened and they told her if that would bring peace in her life, then she should go for it.

“They told me to do as my husband had said. In the morning I went to Bwire and told him what happened.”

Weta decided to go for Bwire, Millicent’s man and convinced him to marry her, which he bizarrely agreed to. Weta told Bwire that Auma had moved in with her husband and they told her to look for him (Bwire). Bwire asked her to go pick up her children and come with them to Matayos.

According to Bwire who spoke to members of the press at his home, Millicent left him and vanished only for him to learn she had been married elsewhere. Bwire confirmed that they were staying together as man and wife after his former wife left him without a trace.

“I called Auma several times but she was not picking my calls so I gave up,” he said.

He added that between him and Barasa, one person may regret the decision.

“It is either me or him who will regret afterwards but for now I am happy with my new catch,” Bwire added.

When contacted, Barasa stated that he is no longer interested in Weta because he is happy in his new marriage. He expressed satisfaction with the new but strange development, saying he is more than happy in his new union.

“I will never try to follow her since she was a burden to me and I never loved her. If she has accepted to stay with Bwire, so be it.”

On his part, a seemingly relieved Abwire said:

“Since this woman came here, I am at peace. I am no longer having sleepless nights as before. Everything I need she gives me.”

Villagers led by Hector Osuru expressed their shock over the actions of the four.

“I have never witnessed such a thing in my life. Since they are mature and sound people, we respect their decision. It is their lives.”