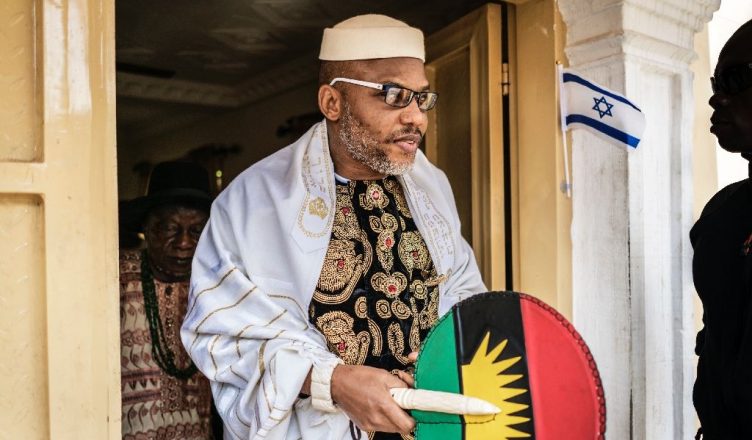 Nnamdi Kanu, leader of the Indigenous People of Biafra (IPOB), was lured at the weekend to a location in an African country with a promise of cash donation in millions of dollars,which led to his arrest.

The IPOB leader, who was facing charges bordering on treasonable felony following his campaign for the secession of Republic of Biafra, had jumped bail in 2017 after a military action, code-named “Operation Python Dance”, targeted his family house in Abia state.

We reported earlier that the operation to re-arrest and put him back on trial had been “ongoing for a while” until success was recorded on Sunday, June 27.

A source close to the Federal Ministry of Justice said,“He was not arrested in the UK or Brazil or Czech Republic. He was not crated either, contrary to speculations” .

Though the Nigerian government has not named the country where Kanu was arrested, with Abubakar Malami, the attorney-general of the federation, just saying he was “intercepted” and extradited to Nigeria.

However, THEWILL, an online newspaper, reported that the “interception” took place in Ethiopia, where it said Kanu had been living for a while.

THISDAY specifically named Addis Ababa, the capital city of Ethiopia, as the location.

Our correspondent learnt that Kanu was tracked through some members of IPOB who were recently arrested following a massive military operation in the south-east.

The security agencies worked through the links to give the IPOB leader the impression that he was going to be given some “millions of dollars” in cash donations to the organisation.

He was said to have decided to collect the money himself “because of the huge amount involved”.

Kanu even kept his associates in the dark about his mission, according to the source who said the top hierarchy did not know his whereabouts on the day he was arrested.

He had been having a crisis of confidence with some of his lieutenants over financial matters.

On arriving at the location where he was to collect the ‘donation’, he was arrested by that country’s security agencies and Interpol, and deported to Nigeria, the source said.

This has brought an end to the long-running episode since he left Nigeria while on bail.

His trial is expected to resume on July 26.