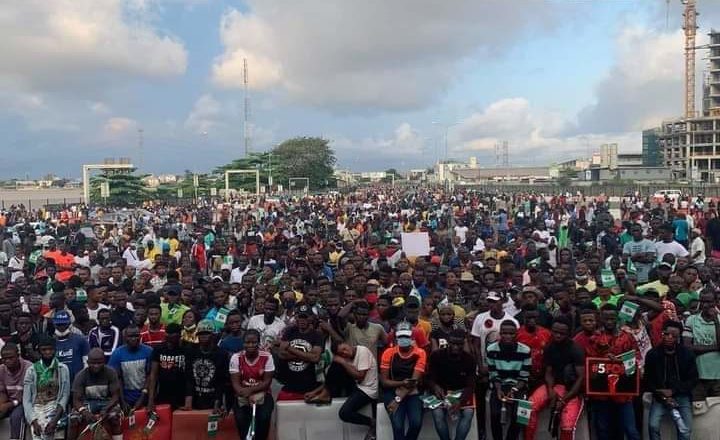 “Most people live in a myth and grow violently angry if anyone dares to tell them the truth about themselves”.
Robert Anton Wilson

My support for EndSars agitation is turning into a myth going by the events of the recent times. The support was initially on the belief that the action will lead to reformation but it is crystal clear that the struggle has been hijacked. How can we allow ourselves to be deceived that our fight for EndSARS will bring peace to the nation? What is staring us in the face now is lawlessness, impunity,killing, robbery and disrespect to the constituted authorities. These are not what the typical Yoruba child is known for.

The following are the falsehoods they want us to believe.

What benefit is the burning of over ten police stations in the state.
The people in Lagos state are now exposed to security threats within and from the outsiders. Guns are freely in the hands of the hoodlums who will in turns use them to attack those of us who cried for SARS to end.
Police officers are now scared to act to avoid the fear of being called violators of human rights.

The wanton destruction of those structures that make Lagos center of excellence is another cause for concern.

Lagos is the center of press in Nigeria where many media houses are domiciled. Why do we open our eyes for some idiots to burn these monuments in the name of EndSars?

Other structures that boost the Internally generated revenue (IGR) in Lagos like banks, Nigerian Ports Authority, BRT, and Hotels should not be allowed to be destroyed in the guise of who owns them and who is not happy with them.

Why should we be clapping for boys who went to the palace of Oba of Lagos to chase him out. That is sacrilegious!!. His palace was looted and his staff of office displayed on the street by the children that were not told the tradition of the land. The same treatments were melted on Soun of Ogbomoso and Alafin of Oyo. Yorubas should think before giving our total supports to these endsars protests.

Many hospitals, health centers, schools were razed by fire. Where will the health problems of our people be taken care of?

Lagos is the only state with good distributions of health facilities to care for the masses. We should rise against these demaging rogues before more damages will be done.

Their anger on the school structures will definitely affect the well coordinated educational system in the state. This state should not be dragged back academically in the name of endsars.

Is vandalising public property in the name of protest or looting not a criminal offence. Many Local Government Secretariats are now desolate.

Why should we believe that Asiwaju Hammed Tinubu is the root of all the problems in the country?
It was initially rumoured that Asiwaju was the sponsor of the EndSars protests to discredit the Government of Buhari.
The same Tinubu invited the military to kill the protesters. How coordinated are these arguments?

I think the attack on the person of Tinubu is basically a build up to the coming election. Lagosians and the Yoruba in general should be vigilant.

Yorubas should not join hands with the enemies to condemn Asiwaju to the dustbin of political history like they did to our other leaders in the past.

The fake and unsubstantiated news or reports aggravated the crisis. Nobody was able to give the pictorial evidence of over seventy five people said to have died at the Lekki toll gate. Which mortuary were their bodies deposited?

Let us filter every information before rebroadcasting to tame this degree of destruction.

AFTER THE ENDSARS PROTEST

After the EndSars protests, won’t the yahoo boys resort to using our ladies as objects of rituals? Won’t kidnappers take over the street again?

This is the time for Lagosians to start thinking of what Lagos state will be after these protests. We should rise to fight for the preservation of our heritage and cultures.
We should collaborate to restore peace and tranquillity.