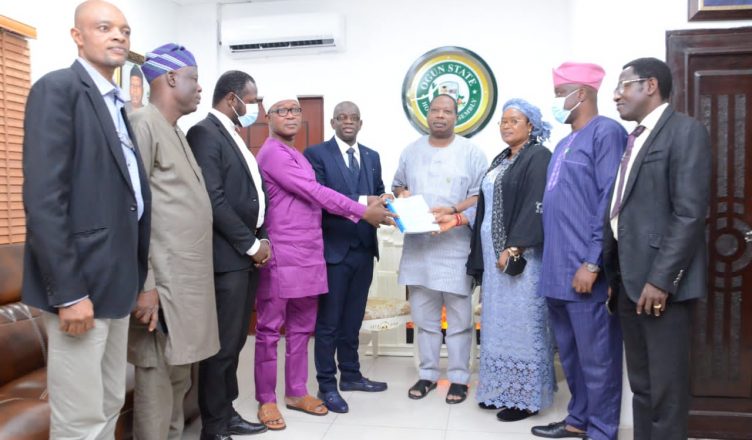 The leadership of Ogun State House of Assembly has received the report of five-man Technical Committee earlier inaugurated weeks ago to harmonize the inputs of all stakeholders on the proposed Obas and Chiefs, Council of Obas and Traditional Council Laws of Ogun State, 2021.
Receiving the report, the Speaker of the Assembly, Rt. Hon. (Prince) Olakunle Oluomo in company of the Majority Leader, Yusuf Sheriff Abiodun and Chairman, House Committee on Local Government and Chieftaincy Affairs, Hon. (Mrs) Ajayi Bolanle, applauded the members of the committee for bringing to bear their wealth of experience, in legal and chieftaincy related matters, to fine-tune the proposed legislation to accommodate current realities and ensure the relevance and sustainability of our traditional institution.
Oluomo stressed that the formation of the Committee which had acted within its scope of duty was needed in the enactment of a law that would stand the test of time and address all existing irregularities that had resulted into controversies and litigations on chieftaincy matters in the State.
Assuring of the passage of the law within record time, Oluomo explained that the report of the Committee would be presented before the Committee of the Whole House for further legislative actions and passage.
Earlier in his remarks, Director, Civil Litigations and Advisory Services, who is also the Chairman of the Committee, Mr. Phillips Akinsinde, appreciated the Assembly for the opportunity availed the Committee members to contribute their quota to societal reforms through such legislation, adding that they were solely guided by the scope of duty assigned them in relation to the presentations and inputs from stakeholders.