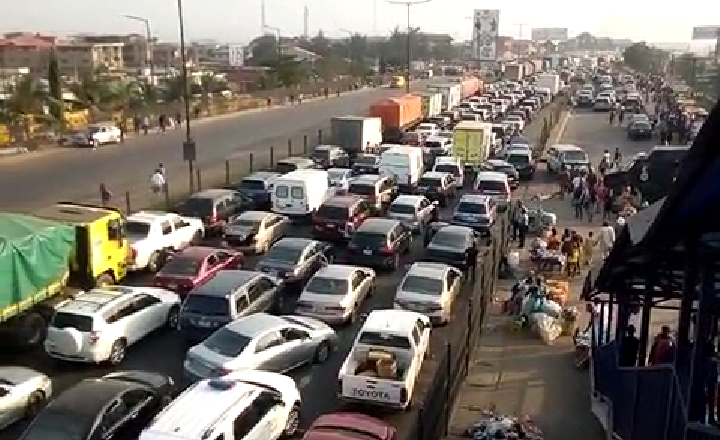 Its total gridlock along Kara bridge of Lagos Ibadan Express Road since 2am today as a lorry loaded with diesel had an accident and caught fire.

The fire incident which left the driver and the motor boy burnt beyond recognition,and several people with injuries,also consumed several cars packed along the road.

The number of casualies can not be established as at the time of this report,but the remains of the driver and the motor boy have been deposited at the morgue of Olabisi Onabanjo University Teaching Hospital,SAGAMU .

The official of TRACE Corp have directed motorists to take alternative routes as their officials and other security agencies are on ground to control the situation.

The TRACE spoke person, Babatunde Akinbiyi said,” the situation is under control as the traffic jam is gradually reducing as our men and other security agencies are in-charge.”

The accident was said to be a lone collision of the lorry,and the fire fighters who got to the venue were attacked by hoodlums which kept other security agencies away,and the fire made great damage.

Many vehicles packed by road sides,and a car mart were totally burnt.A luxurious bus that was faulty packed close to the scene was also totally burnt.