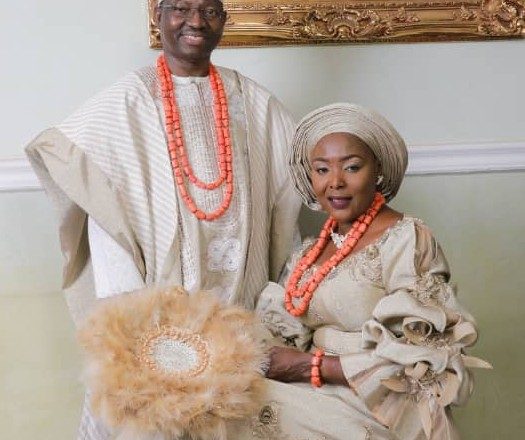 The solemnisation of the Holy Matrimony which was well attended by many ministers, families and friends, well wishes from far and near,between Pastor Senfuye and his wife was so glamorous and colourful as everyone was in White.
The popular and respected prophet of God,CAC Agbala Itura, Prophet Abiara was at the event.He thanked God for the life of the man of God and his ministry,as he admonished the congregation with biblical directives.
“It is a good thing to give thanks unto the Lord” – Psalm 92:1, we are all gathered for this, All white Thanksgiving Service because, according to our source, found relevance in the lives of the duo of Pastor and Mrs Senfuye who practice it tenaciously. They rejoiced in the magnanimity, Grace and the inexhaustible mercies of God.”He said.
National President of Pentecostal Fellowships of Nigeria (PFN)Bishop Wale Oke, charged the couple to honour and respect each other if they truly wanted the abundant Grace of God in their lives. “Love your wife, pamper her, adore her and you will get the best of her. Honour him, treat him right and respect him, then the bountiful blessing of God will abide in you”.
Among ministers of songs were Ayan Jesu,who took the large audience in their praise dance.
The Treasure House of God pastor,got married again after two years he lost his first wife.The marriage was blessed with a daughter.