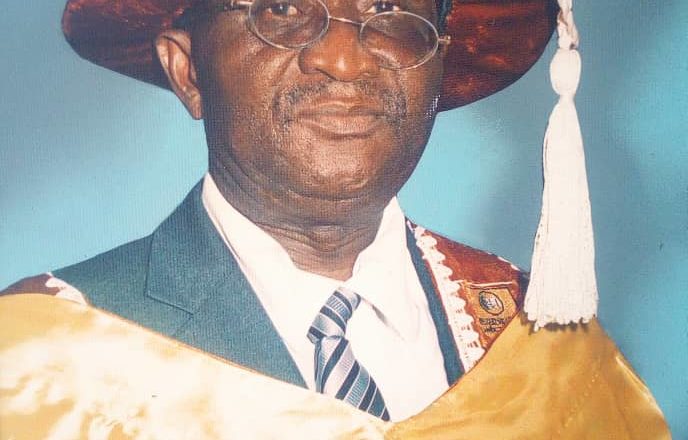 Life is a stage. Every living soul mounts the stage. At the end of their performance, they disengage while others continue the acting to the admiration or disapproval of their beholders.Apologies to William Shakespeare.

The exemplary Professor Hassan Kehinde Okeleye came up stage as an exemplary performer, dazzled his audience and garnered a loud ovation. Exeunt! He bowed. Curtain dropped! Lights faded out. And he was out of sight.Conspicously his last performance on the earth stage. The erstwhile vice chancellor of Crescent University, Abeokuta, Nigeria has gone on a journey of no return. He has signed out to proceed on another journey.

Bespectacled. Soft-spoken. Gentlemanly. He came in, determined to re-organise, appraise and impact positively on the vision and mission of the founder,His Excellency Prince Bola Ajibola. He had consulted every unit, department and college of Crescent University, Abeokuta when he was appointed as its vice chancellor in December 2010. By doing this he had got a useful feedback to work on. Thenceforth, he had interactions with virtually all members of staff of the university to get acquainted with them on the one hand and to grasp their face-to-face reservation on the other.

Late Professor Okeleye smiled orders, handshook success, led laudable projects, arbitrated congress, troubleshot crisis, projected progress and midwived lofty accomplishments. He spoke lesser than he listened. A strength and an excellent tool of a two-way communicator. He gathered over 50% of solutions to problems from his subordinates’ feedbacks to let them realise that their voices counted in the scheme of things, although he wielded his own antidotes at hand.

At different interactions with Crescent University publics, both in the north and southern parts of the country, he led his team with sincerity of purpose and actions. A man of his words, Professor Okeleye never bullied his subordinates.

He possessed qualities of a good leader as he was accessible to all. He pursued organisational goals energetically while he would not underestimate any of his staff. He motivated with commensurate rewards and allocated responsibilities judiciously and efficiently. Professor Okeleye would take prompt actions to issues and would never impose decisions. He would not shout orders; he gave instructions with smiles and soft-spoken utterances.

In law of attraction, “likes attracts likes”. Professor Okeleye attracted friendliness with fellow professors, cordiality with his lieutenants, confidence with aides, reputation with the academic community and mutuality with the university publics.

Because he attracted dedication, focus and industry in the discharge of his duties, the Proprietor of the university slept with his two eyes closed because His Excellency, Judge Bola Ajibola was assured that a loyal general was in charge.

When likened to a father of many children, he did not favour one over or above others. All staff members were treated based on their peculiarities. He compensated based on merit not favouritism. His proximity with the National Universities Commission (NUC), Conference of Proprietors of Private Universities in Nigeria (CPPUN) and Committee of Vice Chancellors provided a fillip to the steady growth in development of Crescent University, Abeokuta throughout his stint.

The current Vice Chancellor, Professor Ibraheem Gbajabiamila, in a condolence message, described him with the following words:

“Our dear Professor Okeleye contributed immensely to the growth of Crescent University, Abeokuta within his four-year stint as our vice chancellor. His tenure strengthened our Academic Planning Unit , the National Universities Commission’s accreditation status of all courses and the establishment of Centre for Sub and External Degree Programmes (CESEDEP).

“His leadership also saw the establishment of two more colleges namely: Bola Ajibola College of Law (BACOLAW) and College of Environmental Sciences (COES). I was privileged to work closely with him as deputy vice chancellor between 2011 and 2014 after which he returned to Federal University of Agriculture, Abeokuta (FUNAAB). Until his death, he never ceased to contribute his wealth of experience to move Crescent University forward”.

When he joined the team of the university, within one year, he had separated the chaff from the grains in the academic community. To achieve his set goals, he dropped the toga of his academic zenith as though he were an ordinary member of The Crescent. He would never leave the academic warfront until resource verification and accreditation battles were won so much so that laurels of National Universities Commission (NUC) programme accreditation spoils were counted in his favour.

May Allah accept his return and grant him Aljannat Al-Firdaus.