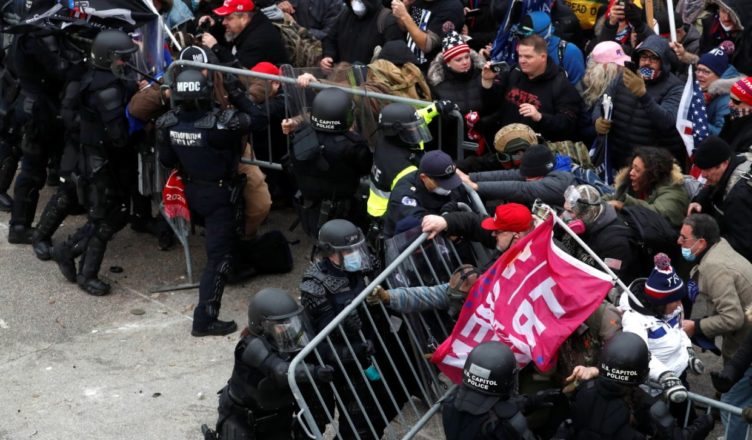 Donald Trump’s reelection campaign began the day he took office in 2017. It ended with police and National Guard soldiers retaking the U.S. Capitol on Wednesday evening after a day of violence and vandalism in the halls of Congress perpetrated by the president’s supporters.

The surge from law enforcement cleared the crowds from the Capitol complex and paved the way for the Senate to certify President-elect Joe Biden’s victory in last year’s presidential election. However, even as they were pushed off Capitol Hill, some of Trump’s diehard supporters insisted the chaos is just beginning.

“It can’t stop. This can’t stop,” a man who identified himself only as Tim, and one of the final remaining protesters, said as the group was dispersed Wednesday evening.

“This has got to go on for the four years of this clown being in the Oval Office,” Tim said, referring to President-elect Biden. “He ain’t representing me. He’s not my president.”

Tim, who said he traveled to Washington, D.C., from Maryland to take part in the protests against Biden’s victory, did not believe the election results were legitimate. “I don’t think anybody voted for Biden,” Tim said. “I think the whole thing was rigged.”

Tim’s friend, Stu, chimed in to describe what he saw as evidence the vote was illegitimate. “They got proof that the machines — they were stacking all the machines with the ballots,” Stu said.

There was no evidence of widespread fraud in the 2020 presidential election, and the results have been examined by outside experts and Republican state officials. And after the Capitol was cleared, those results were expected to be certified by the Republican-controlled Senate with Trump’s own running mate, Vice President Mike Pence, presiding.

The violence at the Capitol Wednesday was the culmination of a large “Stop The Steal” protest in Washington that included speeches by Trump and Rudy Giuliani, one of the president’s staunchest allies.

“We will never give up. We will never concede. It doesn’t happen. You don’t concede when there’s theft involved,” Trump said. “Our country has had enough. We’re not going to take it anymore.”

During his speech, Trump indicated he hoped Pence would somehow derail the proceedings.

After Trump’s remarks, many of his supporters marched across the National Mall toward the dome of the Capitol where the certification of Biden’s victory was taking place.

Pence, whose role was largely ceremonial, made clear he had no plans to overstep his prescribed part in the democratic process. As news of Pence’s decision to let the certification proceed reached Trump’s supporters in the streets, they raged.

“F*** Mike Pence!” chanted the group marching down Pennsylvania Avenue toward the Capitol.

Once they arrived on Capitol Hill, the president’s supporters swarmed the steps and entranceways. They used barricades as makeshift ladders and climbed in and out of windows, eventually overwhelming the U.S. Capitol Police.

“I made it like a foot inside and they pushed me out and they maced me,” said a woman, who identified herself as Elizabeth and said she was from Tennessee. “We’re storming the Capitol. It’s a revolution!”

Trump and some of his top allies attempted to soothe the tensions on Twitter. Their messages, however, were too little and too late. One man attempted to read Trump’s call for calm through a megaphone, but his voice was drowned out by the shouting.

The nascent Trump revolution began to crumble shortly before three o’clock in the afternoon when an alert was blasted to cellphones in the nation’s capital warning that Washington, D.C., Mayor Muriel Bowser imposed a 6 p.m. citywide curfew as a result of the violence.

An hour or so before the curfew, law enforcement began pushing to reclaim the Capitol with a volley of tear gas and flash-bangs. A contingent that included the U.S. Capitol Police and reinforcements from the D.C. Metropolitan Police managed to establish a perimeter around the Capitol dome. Around 20 minutes before the curfew took effect, they advanced.