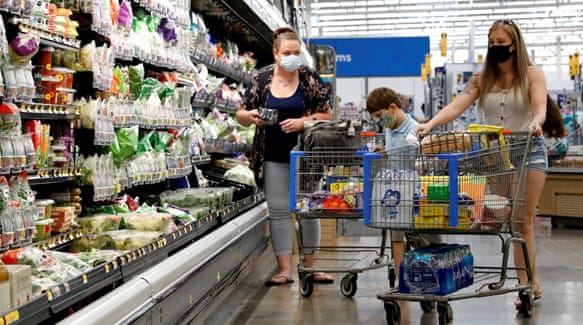 US consumers have called every presidential election correctly since 1976 – with one notable exception.
United States consumers are feeling better about the economy’s prospects, a survey released on Friday showed, but with less than 50 days left until the November 3 elections, they are almost evenly divided over who will win the White House.

The University of Michigan’s survey showed consumer sentiment hit its highest level in September since bottoming out in April, though it is still some 22 percentage points lower than it was in February, before coronavirus lockdowns swept the nation throwing tens of millions of people out of work.

The survey revealed the US election is playing a bigger role in shaping consumer expectations, with optimism about the economy’s prospects improving among Democrats and weakening among Republicans in September.

The Michigan survey has asked consumers which candidate they think will win the presidential election since Jimmy Carter ran against Gerald Ford in 1976.

Turns out, US consumers are rather prescient, picking the correct winner in every election since then with the notable exception of 2016, when then-candidate Donald Trump ran against Hillary Clinton.

The Michigan data from July through September of this year shows consumers expecting a “virtual tie” between President Donald Trump and Democratic presidential nominee Joe Biden, with 47 percent of respondents believing Trump will win, and 48 percent expecting Biden will.

“In one other election had the data been as close as now-in the 1980 election that had Reagan over Carter by one percentage point,” wrote Curtain.

When it comes to who would be better for the economy, 38 percent of consumers choose Trump compared with 33 percent for Biden. But a full 40 percent think whoever wins, it will not make a difference to their personal finances.

The upbeat read on consumers’ outlook for the economy comes against a growing pile of data suggesting the recovery is starting to plateau, as the fiscal stimulus passed by Congress in March fades and negotiations stall on Capitol Hill for another round of virus relief aid.

Layoffs in the US remain widespread, with some 860,000 Americans filing for state unemployment benefits last week and nearly 30 million Americans collecting jobless benefits from state and local programmes at the end of August.

Consumer spending – the engine of US economic growth – also lost steam in August, while activity at US factories decelerated.

On Wednesday, the Federal Reserve signalled it could keep interest rates near zero through 2023 as it prioritises promoting a strong labour market over pre-emptively keeping inflation in check.

While the nation’s unemployment rate fell to 8.4 percent in August from its pandemic high of 14.7 percent in April, Fed Chairman Jerome Powell told reporters this week while policymakers welcome that progress, “we will not lose sight of the millions of Americans that remain out of work”.