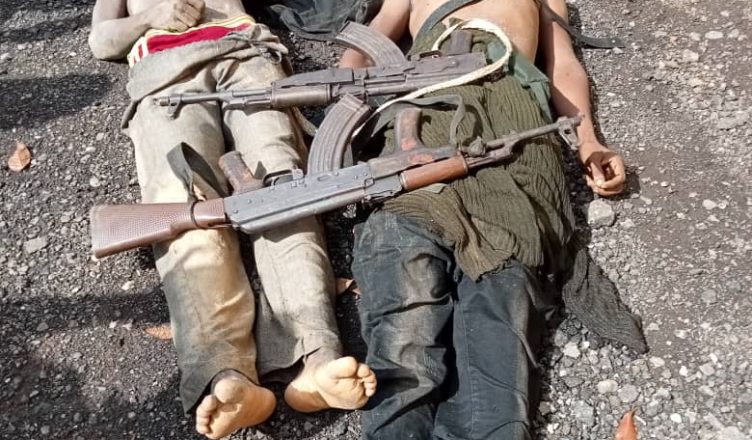 Ogun state police command in the early hours of this morning engaged suspected kidnappers in gun duel at Bere forest in Onigaari area along Lagos-Ibadan Express way.This was a result of information received by the command from members of the public that the AK 47 bearing hoodlums numbering about six were sighted in the forest, possibly waiting for the appropriate time to strike.

According to police report, the CP EdwardAwolowo Ajogun quickly deployed the command’s tactical teams, coordinated by the DPO Owode Egba division, CSP Olusola Oniyiku  to the forest in search of the hoodlums. While the combing was going on, the hoodlums on sighting the policemen, opened fire on them, and gun battle ensued between them.

One of the bandits was shot dead on the spot, while others escaped with varying degrees of gunshot injuries.The police searching the forest further,  one of the bandits with bullets wound was arrested in the bush but gave up the ghost few minutes after.

Two Ak 47 riffles with breech numbers 1983NF1040 and 1987-3-CA-1212 with five rounds of ammunition were recovered from them. The latest riffle recovery makes it four Ak 47 riffles recovered by the command within the period of two weeks. .

Also recovered from them are sachets of tramadol and assorted charms. Meanwhile, the commissioner of police, CP Edward Awolowo Ajogun, has ordered for massive manhunt for the remaining members of the gang. He also appealed to members of the public, especially hospital not to hesitate to inform the police if anyone with gunshot injuries is seen in their area. He therefore assured the good people of Ogun state that the command will not rest on its oars until the state is rid of  criminal elements.