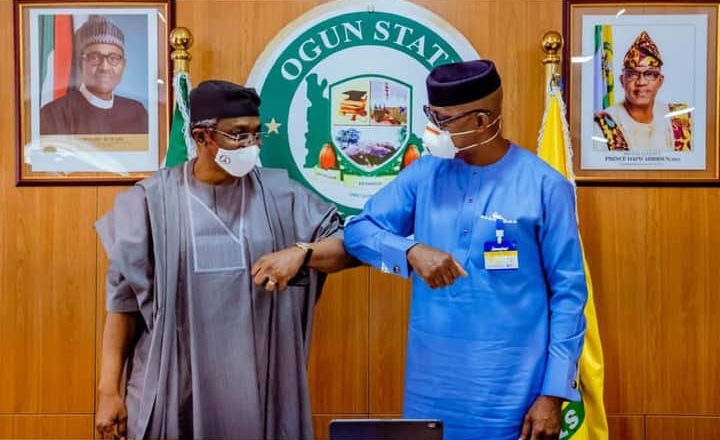 Governor Abiodun of Ogun State has emphasised the determination of his Administration to develop road infrastructure for the collective socioeconomic development of the State.

The Governor, who made this known while receiving in his Oke-Mosan office the Speaker of the Federal House of Representatives, Rt. Hon. Femi Gbajabiamila, stressed the importance of road infrastructure such as the Lagos-Sango-Abeokuta Road which is proximal to Agbara, one of the State’s industrial hubs.

Recall that the State Government is in talks with the FG over the ceding of the busy expressway for full reconstruction.

Governor Abiodun described how his Government was working to complete the reconstruction of the Ijebu Ode-Epe Expressway which it began earlier this year.

Rt. Hon. Gbajabiamila was updated on the efforts of the State Government towards containing the spread of the Coronavirus, including the installation of numerous medical facilities across the State as well as the training of teachers in public schools, in preparation for the reopening of schools.

Governor Abiodun, while eulogising the visiting Hon. Speaker, said he was proud of Rt. Hon. Gbajabiamila because he was not only representing his Surulere Federal Constituency but also the entire Southwest as well as the All Progressives Congress, APC.