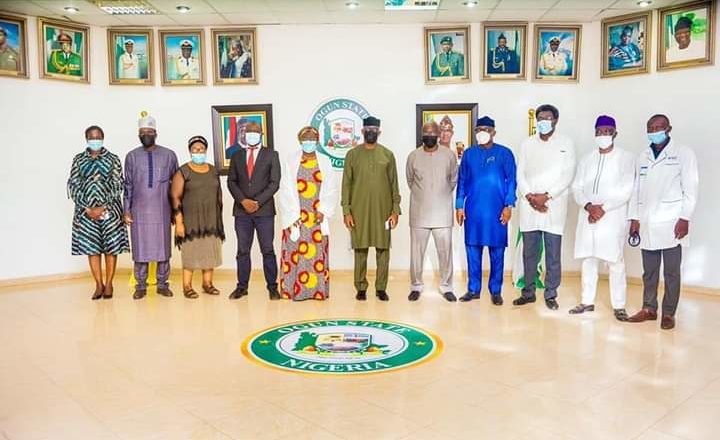 Medical doctors in the employment of the Ogun State Government have applauded Governor Abiodun for approving and implementing “proper remunerations” for them,and the practical steps taken to reposition the health sector for efficient healthcare delivery to the people of the State.

Similarly, the joyful civil servants in the State, on Tuesday morning, thronged out in their thousands to the Arcade Square at the State Secretariat to celebrate, the State governor, Prince Dapo Abiodun who they described as a “talk and do Governor”, for keeping his promises on payment on minimum wage of N30, 500.

While addressing the excited workers, Gov. Abiodun promised that he would ensure Ogun State workers continue to enjoy better welfare package and seamless promotion, saying he would continue to adhere to equity and fairness in appointment and promotion of deserving public officers.

The doctors, under the auspices of the National Association of Government General Medical and Dental Practitioners and Association of Resident Doctors, Olabisi Onabanjo University Teaching Hospital (OOUTH), Sagamu, who visited late Monday said, they came on a thank-you visit to the Governor.

Speaking, the ex-officio and National Chairman, Association of Government General Medical and Dental Practitioners, Dr. Odusote Rafiu, appreciated the Governor for approving and implementing proper renumeration for government doctors in the State, saying the gesture would spur the doctors to put in their best rendering efficient service to the people.

On his part, the President of Resident Doctors, OOUTH, Dr. Mutiu Popoola, recalled the deplorable state of the teaching hospital before the coming of the present administration, saying that the recruitment of doctors and other medical professionals and provision of basic medical equipment, was a clear demonstration of government determination to return the health Institution back to its former State.
Responding, Governor Abiodun, said health is one of the priority sectors of his administration, as the people needed to be healthy to function effectively in any capacity they find themselves.

The Governor who decried the poor condition he met the OOUTH, Sagamu, on assuming office, explained that the recruitment of doctors and other health workers was to address the staff deficit, while the procurement of medical equipment was to urgently see to the needs of the hospital.

He said the Board that would steer the ship and take the hospital to desired destination, would soon be inaugurated. Abiodun expressed delight that things are getting better for the Ilaro General Hospital as a result of government intervention on medical equipment and good access roads.

“It is important to mention that I am, on behalf of this administration, 100 percent committed to ensuring that we will provide a conducive environment for you to function at your peak and also ensure that it is supported with welfare package.

“I hope that going forward, we will continue to relate and interact in such a manner that if there is any issue that arise by way of misunderstanding or on demands that have not been met, it should be handle in a way that it does not lead to a breakdown of service rendered”, Governor Abiodun pleaded.

The State helmsman appreciated the doctors for their selfless service to the State during the Covid-19, and pointed out that the pandemic has negatively affected the State finances whose expenditure increased due to demands from various sectors.

To the Civil servants, Gov. Abiodun assured them that appointment, promotion and career advancement would be merit-based as favouritism would no longer be entertained in the State civil service.

Governor Abiodun described the State workforce as the best in service delivery in the country, adding that the State has produced world class civil servants who have made headway in different parts of the world.

“No nation or State can achieve any meaningful development without workers who are well motivated to perform optimally. We will continue to constantly and regularly pay our workers salary and other benefits to enable them discharge their duties efficiently.

“I know that there has been a breach of trust in the past between the government and the workers. On our part, we will continue to build trust with you. There should be no mistrust or misunderstanding between us. You are the essence of this administration. I can assure you that we will continue to engage you and I am happy that the trust is being restored”, he noted.

The Governor expressed gratitude to God for the low number of death recorded in the State and the nation as the result of the Coronavirus, regretting however that it has adversely affected the economy and financial fortune of the state.

He appreciated the people of the State for restraining from violence acts during the EndSARS protest, noting that the Ogun remain the only State in the south west that did not witness violent destruction of public and private properties.

While calling for patience, understanding and renewed vigour in service delivery, Prince Abiodun assured workers that other demands and enticements would be met as the finances of the State improves.

Speaking earlier, the Head of Service, Alhaja Selimot Ottun, maintained that government has well-thought-out welfare programmes for the workers, saying the State workforce was poised to improve the Internally Generated Revenue through efficient services to the people.

Representatives of the NIgerin Labour Congress (NLC), Trade Union Congress (TUC) and the Joint Negotiating Council (JNC), lauded government team at the negotiation table for showing uncommon commitment that led to the arrival of the new minimum wage in the State.