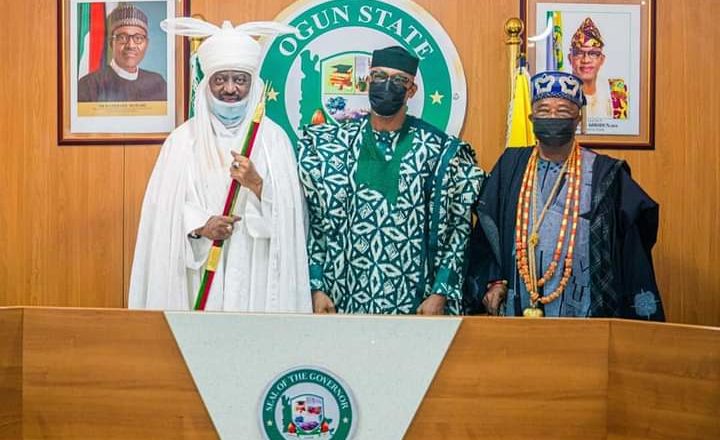 The security of their lives and property, he said “is as important as those of Ogun State indigenes because we believe that the task of building our future together agenda of his administration wouldn’t be complete without the contributions of the diverse ethnic groups residing in the state”.

Prince Dapo Abiodun made this disclosure while receiving at his Oke Mosan office, the Emir of Kano, Aminu Ado Bayero.

Gov. Abiodun said that his administration opted to have an adviser on inter-community relations from Sokoto State, because his administration values the role of diversity, adding that “we believe ethnic groups residing in the state must also have a voice.

“We appreciate the fact that we cannot do it alone. So, we encourage inter-ethnic relationship with others. I have in my cabinet, Alhaji Hadi Sani from Sokoto State as a Senior Special Assistant on Inter-community relations. We recognize the fact that we have a lot of diversities in our state and they must have a voice and representation so they know we do appreciate them,” he said.

The Governor disclosed that the Kano monarch was the first Emir he received since assuming office.

Abiodun described Bayero as a thorough bred professional who is well-schooled and grounded for the position he occupies. He expressed the hope that the visit would open doors of opportunities to people of both states: “We would stretch out the same hand of fellowship to other traditional rulers. That will breed goodwill and better understanding that could thin out and eventually erase our fault-lines”, he explained.

The Emir of Kano, Aminu Ado Bayero in his remarks, described the Alake of Egbaland Oba Adedotun Gbadebo as his father, “because there is a long relationship that existed between his late father and the Alake”.

Emir Bayero stated that he was in the state capital to tap from the wisdom and experience of the Alake, who has brought great progress to Egbaland during his reign.

The Emir reeled out the names of prominent sons and daughters of Egbaland who have made giant strides in developing Nigeria, saying that the country’s history would not be complete without reference to them.
While recalling names like Late Chief Obafemi Awolowo, Chief Olusegun Obasanjo, Late Chief MKO Abiola, Chief Ernest Shonekan, Late Alhaji Lateef Adegbite and Professor Wole Soyinka among others, the Emir emphasised that “Ogun State is a land of cultural, educational and administrative excellence and our people have traded and settled here for hundreds of years.

“Kano has also become a second home for Southerners, including Ogun State and people from the Western region. It is an example of how unity brings strength to our people and country”, Ado Bayero noted.

While thanking the Governor for the peace and protection given to his people, the Emir enjoined Egba people to sustain the cordial relationship with their Kano migrants.

He said the nation would be a better place when people of diverse culture relate as one.

Also, the Alake and Paramount ruler of Egbaland, Oba Adedotun Gbadebo described the relationship between the people of Egbaland and the Kano Emirate as cordial, saying like him, the Emir believes so much in the unity of the country.