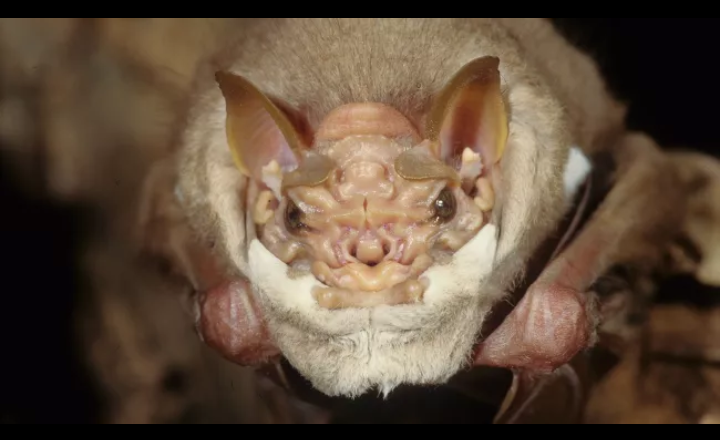 If you had a face as puckered as a wrinkle-faced bat’s, you too might hide behind a mask to seduce a mate.

When breeding time rolls around for male wrinkle-faced bats (Centurio senex), they gather together in groups and cover the lower half of their remarkably wrinkly faces with white-furred flaps of skin that resemble face masks. They then chirp ultrasonic songs through the masks while twiddling their wings.

Scientists long suspected that the skin flap under the chins of these elusive bats had something to do with courtship, and researchers recently observed and documented this astonishing sight for the first time. Dozens of male bats masked up (only the males have masks) but didn’t socially distance. Instead, these “masked seducers” perched together and sang in a group courtship display unlike any seen before in bats, researchers wrote in a new study.

Though scientists don’t know for sure why males would mask up for mating, it’s unlikely that they’re using the masks as humans commonly do: to prevent the spread of disease. It’s possible that a raised face mask may send a visual signal to females that a male is ready to mate, or perhaps it traps olfactory secretions that are released when the mask is lowered at the moment of copulation, according to the study.

Wrinkle-faced bats live in forests “from Mexico throughout Central America to Venezuela and Trinidad and Tobago,” and eat fruits and seeds, the scientists reported. Unlike other bats in this family — Phyllostomidae, or New World leaf-nosed bats — C. senex doesn’t have a leaf-shaped nose flap, and its bizarre, puckered face is more deeply creased than that of any other bat species.

These bats are difficult to capture, and little is known about their behavior and habits in the wild. So it was a stroke of good luck when a pair of nature guides unexpectedly spotted several of the bats perching together in a tree — “hanging exposed and rather calm” — during a night walk in a tropical forest in San Ramon, Costa Rica, on Sept.15, 2018. When lead author Bernal Rodríguez-Herrera saw photos of the rare bats and their unusual behavior, which the guides had passed along to other bat researchers, he immediately knew the nature guides had stumbled upon “an incredible find,” he said in a statement.

When males perched in the branches, they pulled up their masks and “sang” through the flaps of white-furred skin.

When males perched in the branches, they pulled up their masks and “sang” through the flaps of white-furred skin.

Rodríguez-Herrera, a professor at the School of Biology and director of the Center for Research in Biodiversity and Tropical Ecology at Costa Rica University, quickly assembled a team to observe and record the bats. They made 13 visits to the location over six weeks, between Sept. 27 and Oct. 31 that year; every night, the bats assembled in the same spot between 6 p.m. and midnight local time, hanging about 10 feet (3 meters) above the ground. The team recorded video with an infrared-sensitive camera, and captured audio of the bats’ ultrasonic songs and echolocation calls.

As many as 30 male bats perched during the same night. Most of the time, they were masked, using their “thumbs” to pull the masks up or down. Through their masks, they sang “courtship songs” composed of echolocation sequences, trills and whistles, punctuated by sequences of wing beats, the scientists reported.

When a male successfully attracted a female companion, he “immediately lowered his mask” to mate with her. After they finished, about 30 seconds later, “the male immediately raised the mask again” and resumed singing and beating his wings with the rest of the male bats, the researchers reported. Female bats seemed to be highly selective when choosing their mates — 79% of the successful copulations were performed by just 6% of the males.

Female bats lack the white “mask” that the males wear during courtship.

Female bats lack the white “mask” that the males wear during courtship.

When males gather and perform together in competitive courtship displays such as these, the behavior is known as lekking. Lek mating parties are more commonly seen in birds, where they’re found in at least 148 species. Lekking is poorly documented in mammals and is almost never seen in bats, according to the study. The researchers’ observations raise intriguing new questions — about why they wear masks; how the males’ health is affected by the rigors of group performance; how the males coordinate their songs and displays; and how female bats choose between the masked males, Rodríguez-Herrera told Live Science in an email.

Since discovering lekking in wrinkle-faced bats, the study authors have encountered a new wrinkle: getting more data. In the two years since the 2018 sighting, the bats haven’t returned to that site.

“We think that these bats are nomads, they move around a lot,” study co-author Marco Tschapka, a research associate at the Smithsonian Tropical Research Institute from the University of Ulm in Germany, said in the statement. “We may never get to see this behavior again in our lifetimes.”