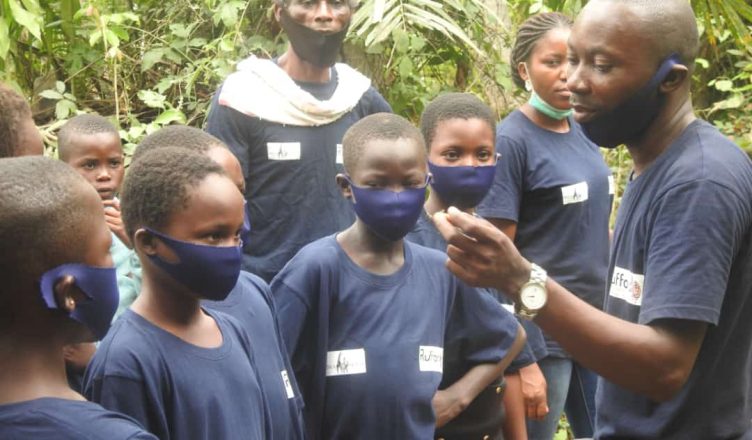 A group of conservationists through a “Survey of the endangered yellow waxtail damselfly Ceriagrion citrinum” in a riverine community, highlighted the ecological importance of dragonfly.
The rare conservation project, funded by Rufford Foundation, is one of the conservation efforts of some young Nigerians to promote the conservation of dragonfly and other insects of ecological importance.
After giving explanation about the ecological importance, threat status, how to identify and protect them etc., Mr. Ekpah Ojonugwa, the Project Officer, led some primary school pupils on this expedition into the forest in search of the damselflies.
During the interactions with the participants, he said “We call all of them dragonfly but technically, dragonflies are anizygoptera while damselflies are zygoptera. Meaning unequal wings and equal wings.”
He revealed that dragonfly is a beneficial insect and of ecological importance belonging to the order odonata. Dragonflies are expert fliers. They can fly straight up and down, hover like a helicopter and even mate mid-air. If they can’t fly, they’ll starve because they only eat prey they catch while flying.
“About 7,000 species of dragonfly are in existence which include yellow citril damselfly.” He added.
According to him, this yellow citril damselfly or yellow waxtail damselflies is scientifically referred to as Ceriagrion citrinum, are only found in Nigeria and Benin Republic and was only last recorded in Sapoba Forest Reserve in Edo State Nigeria in 1972.
The International Union for Conservation of Nature believes that if not properly rescued, dragonflies are likely to go into extinction because of environmental and water pollution.
He added that the Insects require stable oxygen levels and clean water as scientist consider them reliable bio-indicators of the health of an ecosystem. Dragonfly prey on mosquitos, thereby reducing the mosquito population. A single dragonfly can eat thirty to hundreds of mosquitoes per day.
They embarked on this project to create awareness and enlighten the people of rural communities and school pupils as a form of environmental education.
The Baale of Sunmoge, Chief Adekunle Ewukoya described the visit of the conservationists as an eye opener for them on the importance of the age-long insects which they referred to as ‘lamilami’ in their local dialect.
Some trees were planted within the community while rounding up the activities, where Ms. Ibukun Lawal, a member of the team assured a regular visit to the community.
The survey took place on Wednesday, 17th March, 2021 at Sunmoge, Omo Forest Reserve in Ogun State.