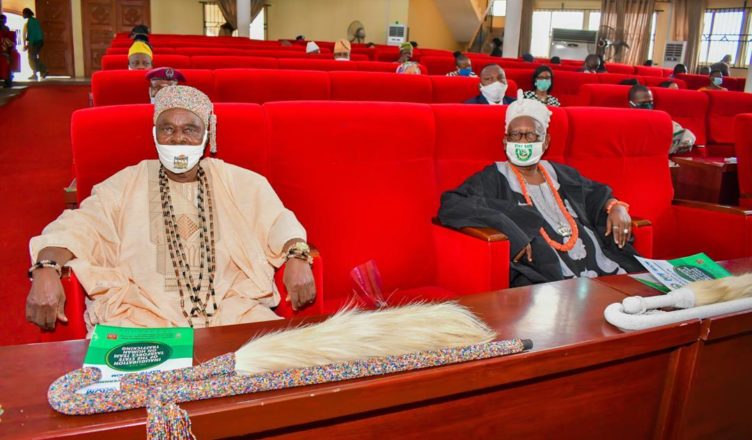 Other members include representatives of youth organizations, various professionals including security specialists across the state and Hon Akingbolahan Adeniran, the Ogun State Attorney General and Commissioner for Justice, as chairman.

Dame Julie Okah-Donli, the Director Geberal of NAPTIP charged members of the Task Force to gird their loins in readiness for battle against the criminals who traffic in humans, explaining that the crime and human rights infringement had not isolated their neighbourhood as indigenes of Ogun State take significant percentage of rescued victims.

Earlier, both Ogun State Attoney General, Akingbolahan Adeniran and Commissioner for Women’s Affairs, Hon. Olufunmilayo Efuwape had reeled out the mandate of the NAPTIP and the Ogun State Task Force Team as:
• To coordinate all laws on trafficking in persons
• To adopt measures to increase the effectiveness of eradication of trafficking in persons
• To adopt witness protection measures

• To enhance effectiveness of law enforcement agents to suppress traffic in persons
• To establish proper communication channels, conduct research and work on improving international cooperation in the suppression of traffic in persons
• To reinforce and supplement measures in bilateral and multilateral treaties and conventions on traffic in persons.
• To work in collaboration with other agencies that may ensure elimination and prevention of the root of the problem of traffic in any person;
• To strengthen cooperation between the Attorney General of the Federation, Nigeria Customs Services, Nigeria Prison Services, Welfare officials and all other agencies in the eradication of traffic in persons;
• To take charge, supervise, control and coordinate the rehabilitation of trafficked persons
• To investigate and prosecute traffickers.
NAPTIP is a Federal Government of Nigeria Agency established in pursuant to the Trafficking in Persons (Prohibition) Law Enforcement and Administration Act 2003 as re-enacted in 2015.