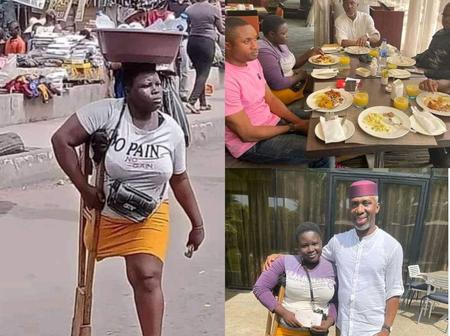 It’s very disheartening that honesty and dignity is gradually vanishing from our society.
Every unit of the society is sick and needed psychological surgery for normalcy to return.
Few weeks back,I heard in my neighborhood that giving arms to street beggers have become an abomination.Before I said jack,I was flooded with different versions of ritualists parading as beggers and urchins.I was told the arms were used for diabolic purpose,as confessed by the one apprehended.

Few days ago,three police men were dismissed for extorting a student at gun point of the sum of #150,000.The student was told,”We will waste you if you don’t co-operate.”The student was taken to a POS boost where he transferred the money to an account provided by the police officers.Heartless People.
I thought I have seen it all until agent Mary was caught after investigation for an allegedly playing on our intelligence.
Mary Daniel,the amputee hawker whose picture came on the social media with sympathy and commendation,was sadly a stage managed deception.
Nigerians were shocked when Lagos State government discovered falsehood in the Story of Oshodi amputee hawker, Mary Daniel, prompting the government to withhold her #25m donation. The Oshodi amputee hawker had claimed that she lost a leg in an accident which killed all passengers, including her parents when she was a teenager.
Alas, investigation revealed that her leg was amputated at birth,not through an accident as she claimed.
In addition,Daniel, in an interview, claimed she was an orphan with a baby and an aged grandmother to fend for.

She narrated how life dealt her several blows and she had to drop out of school and hit the streets to make ends meet.

This prompted the state government to immediately shelter her to prevent criminals from taking advantage of her as many well meaning Nigerians have donated handsomely to her.
All seems to be going well for the young lady until the state government discovered on Thursday her father was alive while she was amputated from birth.

With this information, Governor Babajide Sanwo-Olu immediately handed her over to officials of the social welfare for investigation following revelations that her case was staged.

Daniel,as it was gathered, was receiving strange calls from those who staged her story with threats to reveal the truth unless she gave them their share of the money.

It was learnt that Gov Sanwo-Olu handed her over to officials of welfare in the presence of the police and some Kogi leaders, who attested her father was alive.
Commissioner of Police Hakeem Odumosu confirmed that She was handed over to the Social Welfare. There were irregularities and lies in the account of her life she gave.

“It was also discovered that her presence in Oshodi was staged. Those working with her played on the intelligence of Nigerians to get donations for her.

” It came to light when the people started threatening her. She promised some N500,000 others different amounts and was planning to return to her home state when the information leaked.

“I had to attach some policemen to her to prevent any attack on her when she went to the bank. We suspected those people might follow her but everything went well as they were not seen.

“Presently, the state government is preventing her from accessing the money.”
The media and the government are also guilty of this fraud.How on Earth will you believe such story without any investigation and fact checking.If she had not been caught, someone else will cook such story somewhere else with the target of financial donation from unsuspected public.
She ought to be handed over to law enforcement agency to serve as lesson to others with similar intention.
Her trial is part of measures for us to have a sane society where dignity of labour,and honesty of purpose will be appreciated.