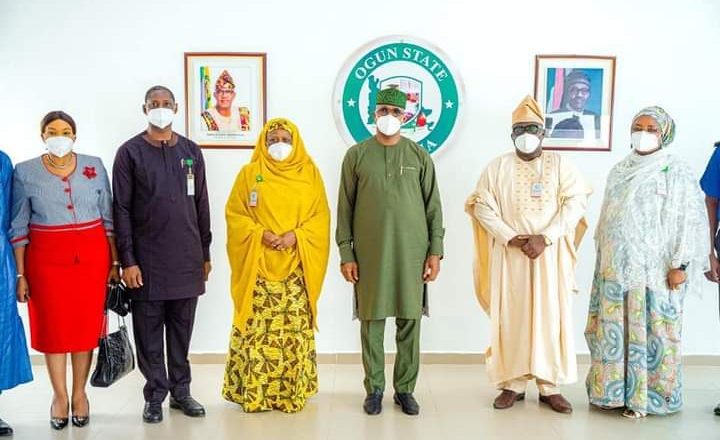 Chairman of the National Youth Service Corps Governing Council, Ambassador Fatimah Abubakar, has described Ogun State Orientation Camp as, “a five star hotel”, due to the quality of facilities available at the camp.

Speaking when she led members of the Council on a courtesy call to the Governor, Prince Dapo Abiodun, in his office at Oke-Mosan, Abeokuta, Ambassador Abubakar said her team has visited many orientation camps in the country, but none compared to the one built by Ogun State in Sagamu.

“Ogun State is the most friendly NYSC State in the country. I have gone to many orientation camps in this country, I must say that Ogun State has the best orientation Camp. Infact Ogun State camp is like a five-star hotel. It’s the best”, she noted.

While commending the State government for assisting in carrying out COVID-19 testing for all corps in the State, Ambassador Abubakar, appreciated the State Governor for embarking on massive renovation of the State NYSC Camp, restoring allowance to the Corps members and electricity to the Scheme’s Secretariat, requesting for the provision of an Ambulance, additional staff quarters and 100 hectares of farmland for the scheme initiative.

Responding, Governor Abiodun said that the creation of the National Youth Service Corps (NYSC), has helped in fostering and preserving the unity of the country.
Prince Abiodun stated this when he received the NYSC’s National Governing Board in his office at Oke-Mosan, Abeokuta, noted that the scheme has succeeded in uniting the people through the exposure of youths to the diversity of the country.

“Ogun State host about 22,000 youths each year from different parts of the country. This scheme has help a lot in promoting national unity and encourage peaceful co-existence”.

The Governor pointed out that his administration’s concern for the wellbeing of Corps members, led to the Covid-19 test on every member posted to the State last year, assuring that their welfare would continue to be given priority.

The Governor stated that notable son and daughters of the State were involved in establishing the scheme, expressing happiness that its has succeeded in achieving its objectives.

He said as the education capital of the country, the desire of his administration to provide conducive learning environment, led to the various Interventions in the sector, which he opined, has yielded positive results.

While lauding the State Coordinator of the scheme for her diligence and hard-work, Governor Abiodun noted that his administration has empowered more that 20,000 in the Central Bank of Nigeria’s agricultural programmes, assuring the allocation of 100 hectares of farmland to the scheme to support its Agriculture initiative.