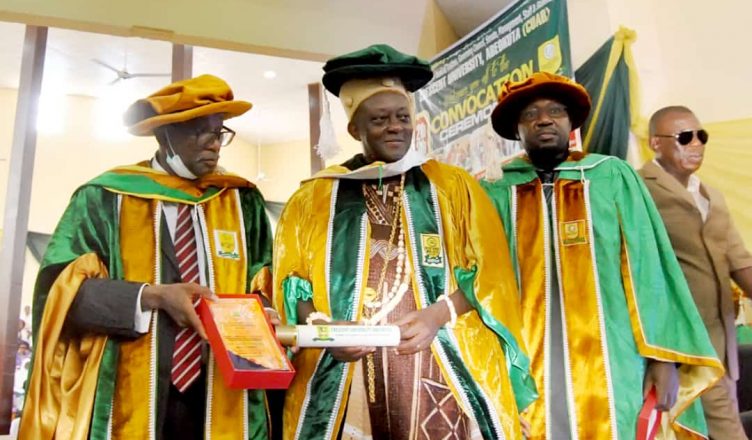 Two honorees at the just concluded combined Twelfth and Thirteen Convocation of Crescent University, Abeokuta, Dr Mohammed Kyari Dikwa who is Founder and President of Al- Ansar Foundation and Princess Rosemary Osula Mku-Atu, who is Founder of Rosula Foundation have made what the institution regards as ” huge contributions to the development of Academic and Moral Excellence “.

In his Convocation Address, the Vice Chancellor, Professor Ibraheem Gbajabiamila acknowledged on behalf of the Founder/Proprietor, His Excellency Judge Bola Ajibola the donation of a new Toyota ambulance by Dr Dikwa for the support of the new College of Health Sciences, particularly Nursing programme.

In a similar vein, Gbajabiamila also announced the donation of Academic Building as well as scholarship offers for twenty students of Ijamido Children’s Home to study courses of their choice at Crescent University, adding that 80 other scholarship offers by Rosula were underway. In his words, Prof. Gbajabiamila described the philanthropic gestures as generous contributions to the development of humanity and Crescent University.Dr Dikwa and Osula Mku-Atu were conferred with Doctor of Science (Honor is Causal) in Accounting and Business Administration respectively.

At the Convocation, a total of seven hundred and fifty nine graduated with an award of Bachelor of Science (BSc) from Bola Ajibola College College of Law (BACOLAW), College of Arts Social and Management Sciences (CASMAS), College of Information and Communication Technology (CICOT), College of Natural and Applied Sciences( CONAS) and College of Environmental Sciences (COES) respectively.

The institution which prides itself as Citadel of Academic and Moral Excellence also convoked 50 graduands in the School of Postgraduate Studies for Master of Science (MSc) and five in the Abeokuta Business School.

In his speech, the Founder/Proprietor, His Excellency Judge Bola Ajibola who was represented by his son, Prince Adesegun Mahruf Ajibola,SAN, applauded the four honourees, His Royal Majesty Oba Saburi Babajide Bakre (the Agura of Gbagura), Dr Mohammed Kyari Dikwa (former Accountant general of Nigeria), Sheikh Muhyideen Nojimdeen Al-Kubrah(Missioner, Assalat Ar-Rahman) and Princess Rosemary Osula Mku-Atu saying ” Today, you will all wear garlands of our Citadel of Academic and Moral Excellence in recognition of your positive contributions to humanity and social development.”

Ajibola congratulated parents and graduands and noted that “it is no surprise that ladies are on the lead. Perhaps our valedictorian of today should tell us why there are more first-class female graduates than their male counterparts as it is now a global phenomenon. Since the first graduation in 2009, Crescent University has produced more female best graduating students than male. Coincidentally, this is in congruence with our vision of nurturing girl-child education.”

In his acceptance speech on behalf of other honorees, the Founder and President, Al- Ansar Foundation, Dr Mohammed Kyari Dikwa, expressing his gratitude to Judge Ajibola and the university management, stressed that ” This has once again reaffirmed my faith in Nigeria and the future of our education and I strongly believe that the task of service to the nation is a collective one and a worthwhile responsibility. Any opportunity given to us, we must endeavour to do our best towards a better society.

“It all started a few months ago with a correspondence from this prestigious institution, informing me of my nomination for an award of Doctor of Science (DSC) Honoris Causa in recognition of my humble contributions in the service of my fatherland as a public servant and to the growth of education in the country”, Dikwa reminisced.

Dr Dikwa, a former Accountant general of Nigeria said he was proud to be associated with the relentless efforts of the Crescent University in producing some of the best brains that have made their contributions to the socio-economic and political development of our dear nation.
This he said “has made Crescent University to become a breeding ground for academic and moral excellence worthy of emulation”.

According to Dikwa, the proposed Al-Ansar University Maiduguri will be the first of its kind to be established in the entire Kanem-Borno Empire and will be third in the entire North-East region.

Earlier in his convocation address, the vice chancellor, Professor Ibraheem Gbajabiamila said he was pleased to report that ” we have full accreditation for all the university programmes”, and admonished the graduands not to forget their Alma Matter after leaving the institution.

He said ” You will fly the unique flag of this universe of knowledge. We are proud to release you to the world as our ambassadors at large. Make the university proud through your positive contributions wherever you may find yourselves by being hardworking, innovative, committed and ethical in your future work and leadership. “
Gbajabiamila stressed that the trademarks of successful people are they try and try again to excel in every part of life to the best of their abilities. “As Crescent University graduands, you have been equipped to succeed in life and you can look to the future with confidence,” he concluded.