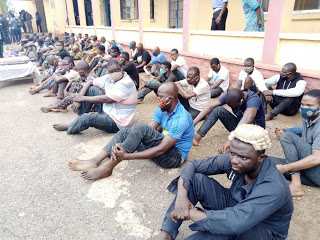 Despite earlier warning by the police authority over illegal gathering and unlawful celebration of 7-7 by members of secret cult,dozens were arrested in different part of the state and paraded today at the Force Headquarters, Eleweran.

The arrest was as a result of security reports that trouble and social unrest were likely to occur in various cities of the state.The suspects were paraded along other suspects for various degree of crime.

The Ogun Command CP, Kenneth Ebrimson said the suspected cultists met their waterloo while gathering to celebrate their yearly 7-7 day.

Ebrimson noted that, Assorted charms, diluted drinks, locally made double barrel pistols, live cartridges among others were recovered from them.

Iteams also recovered from the suspects include; One pump action gun, one locally made gun, and large number of T-Shirts with 7-7 inscriptions.

The commissioner of police however vowed to make the state too hot for criminals,adding that he will stop at nothing until the state is free of crimes and criminalities.