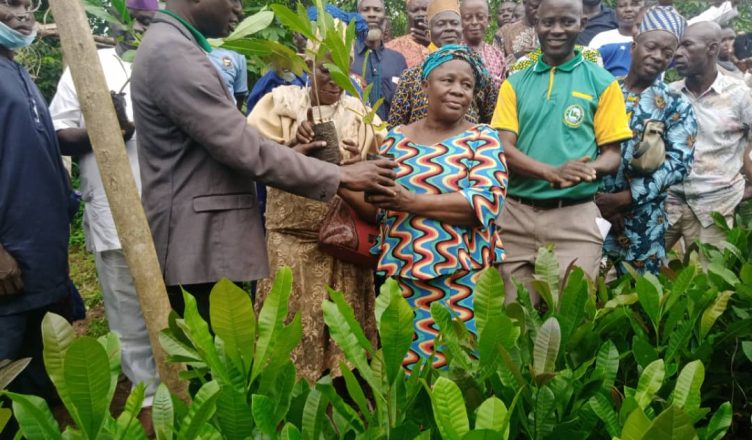 The Ogun State Government has said that it has comparative advantage in cash crops such as cocoa and cashew, which are capable of boosting its Gross National Product (GDP), especially in this era of economic diversification from crude oil to agriculture.

Commissioner for Agriculture, Dr. Adeola Odedina made this known while addressing farmers during the distribution of free improved cashew seedlings at Ikenne Farm Settlement, an initiative meant to alleviate the plight of small holder farmers from the adverse effect of COVID-19 pandemic.

Represented by the Director of Tree Crops and Rural Development Services, Mr. James Oyesola, Dr. Odedina described the move as pivotal in the State, saying the nurtured crops would be free from pests.

He assured that more aids would be provided to them, as well as repair of link roads to various farms across the State, adding that Agric officers from the Ministry would be on ground to guide them at the production period for maximum yields, urging farmers to utilise the opportunity judiciously and advised them against sale of the seedlings.

“Next to cocoa, cashew happens to be one of the foreign exchange products that can improve our GDP. In this era of diversification from oil to agriculture, cashew is one of the crops that can thrive with comparative advantage. That is why Governor Abiodun is emphasising that seedlings should be given free to farmers. There will be due diligence in the distribution and our Extension Agents will monitor the process in their various farms across the State”, he assured.

The Chairman, Ogun State Cashew Growers Association, Chief Sunday Adeniji, said Ogun farmers are lucky to have a Governor who has placed optimal value on agriculture which has benefitted farmers and other agricultural value-chains actors.

Speaking on behalf of other beneficiaries, Mr. Ayo Awoyade, applauded the State Governor whose agricultural programmes have lured him to invest in agriculture, adding that the free cashew seedlings would further boost their livelihoods.