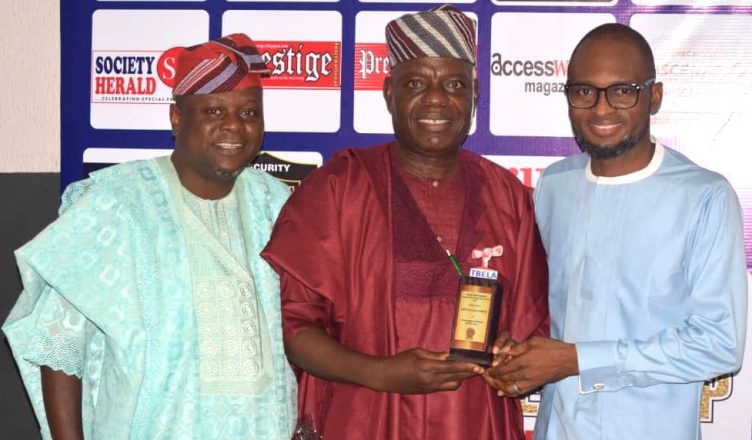 …urges Journalists to celebrate themselves

The Publisher/Editor-in-Chief, AbuSatar Idowu Hamed has been decorated with the prestigious ‘Outstanding Publisher of the Year Award’ at the 2021 Bethnews Exceptional Leadership Award ceremony.

The Veteran Journalist and former Entertainment/Celebrity editor was among other dignitaries who were honoured with various category of awards on Sunday, August 1, 2021.

According to Mr. Seun Fabiyi, Managing Director of Trust Bethnews Media Communications (TBELA), publisher of Bethnews magazine & online, AbuSatar Idowu Hamed was honoured as a result of his outstanding services as Veteran Journalist who has contributed immensely to the development and stability of Journalism in Nigeria, through his sustained publications – StarTrend Int’l magazine & online – www.startrendinternational.com.

His words, “Alhaji AbuSatar Hamed is one of the veteran journalists that always support his colleagues in the industry, and would always go to any length to put smiles on the troubled minds.

“Hence, we are hereby proud to bestow on him the prestigious Outstanding Publisher of the Year Award,”

The event also featured the celebration of organizers 6 years of consistently informing Nigerians through the publication – Bethnews magazine and online.

Seun Fabiyi, the Bethbews boss, the incredible and hardworking Publisher of Bethnews, was also celebrated as he officially commenced the journey of his fourth decade on earth.

The 3-in-1 event which took place at the Lagos NUT Pavilion Event Centre, NERDC Road, Alausa, Ikeja, Lagos, witnessed the convergence of the Media, Corporate bodies, Politicians and Entertainment world legends as well as a gathering of the family and friends of Seun Fabiyi.

The official coverage was done by Seun Okinbaloye, Chief Kingsley Uranta of CHANNELS TV, Kolade Otitoju of TVC, Ola Onabajo of KAFTAN TV and many others.

The event was compered by the duo of Ola Onabajo from KAFTAN TV & Orisun TV Yoruba, and MC 90 from Eko FM, respectively.

AbuSatar Hamed who received the award alongside Chief (Dr.) Lere Paimo, MFR, fondly called Eda Onile Ola, had cut his teeth in the journalism profession over four decades at the rested Sketch Press Ltd, Ibadan, while responding to the award expressed his gratitude to the Publisher and staff of Bethnews magazine for the honour.

He told the audience how he and other entertainment writers had blazed the trail in the industry ensuring constant featuring of stars and celebrities, but lamented that some of those people were going about lording the fame over others as if they were made then through their sheer work and forgetting the contributions of the entertainment journalists.

The veteran journalist lampooned those star artistes who rose to the top through the efforts of committed reporters, but now turned around to ‘bite the fingers that fed them’.

He however urged colleagues in the pen profession to build stars in the journalism industry by celebrating themselves and constantly featuring one another in in their publications and awards recognitions.

AbuSatar Hamed who is also Chairman, Federated Chapel of Ogun State council of the Nigeria Union of Journalists (NUJ), a body that consists of community publishers and editors across Ogun state thanked the veteran Nollywood actor, Chief (Dr.) Lere Paimo, MFR, for coming all the way from Ibadan for the Bethnews award.

“This shows Chief Lere Paimo’s love and respect for the media, and this gesture is highly appreciated”, AbuSatar enthused.

AbuSatar Hamed used the occasion to inform the public that StarTrend Int’l magazine will be 10 on November 11, 2021 when some notable Nigerians and corporate organizations would be honoured with various category of awards to appreciate them for their immense contribution to the socio-economic growth and youth development in the country.

The awards, according to him would also serve as an encouragement for others to emulate the good gestures of the awardees.

AbuSatar Hamed is also the National Coordinator of League of Yewa-Awori Media Practitioners (LEYAMP), an association of Publishers and Journalists in Yewa-Awori axis of Ogun State.

LEYAMP which was initiated by AbuSatar and has its membership across the world was established to promote and defend the course of the Ogun West senatorial district of the state.

The association since its inception has held audience with notable Nigerians.

They include Chief Olusegun Obasanjo and Gen. Abdulsalami Mustapha (rtd) who joined Chief Obasanjo during a visit of the group to the statesman.

Others are Senator Tolu Odebiyi former Chief of Staff to the ex-governor of Ogun state, Senator Ibikunle Amosun, now a Senator representing Ogun Central at the National Assembly.

The group also had audience with Otunba Wasiu Taiwo (Wessy Creation) and Prince Gboyega Nasir Isiaka (GNI) among others.