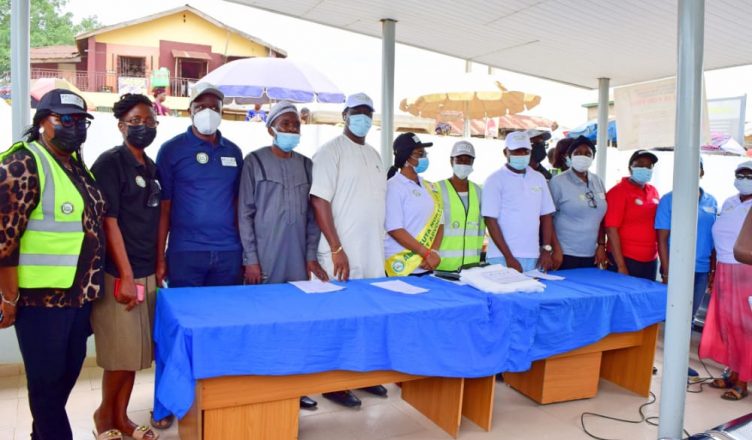 Chairperson of Abeokuta North Local Government, Mrs Bolatito Ayorinde has appreciated the wife of the State Governor, Her Excellency, Mrs Bamidel Abiodun and the Commissioner of Health Dr. (Mrs. Tomi Coker) for their support in ensuring good and healthy living condition for everyone in the state, while pledging her support in enhancing a hitch free campaign exercise towards the replacement of Insecticide Treated Nets (ITN) across the Local Government Area.

Mrs Ayorinde stated this during the flag off exercise for the distribution of ITN at Iberekodo Health Centre in Abeokuta, Ogun State. In her remarks, she noted that the campaign is one of the efforts of the Government in improving and promoting healthy living condition among the dwellers in our society and also a practical way of protecting one’s family from malaria causing means.

The Managing Director of Society for Family Health, Dr Omokhudu Idogbo eulogized the State Government on it’s efforts in curtailing the percentage of malaria infection cases which has encouraged the initiative to replace the earlier distributed and used nets in the last three years.

He further stated that the campaign is 3 in 1 which encompass further sensitization on Covid 19, the laid down precautionary measures and getting shots of vaccines when it is made available while the 3rd is the planned efforts to completely eradicate the cholera as a pandemic in our society.

However, the HOLGA, Mr, Babatunde Owolabi while welcoming the dignitaries on behalf of the Executive Chairman Prince Adebayo Ayorinde expressed gratitude to the State Government and the Roll Malaria Back Partners in making frantic efforts on improving the health status of the indigenes and residents in the Local Government Area.

The Medical Officer of Health, Dr. (Mrs) Atinuke Duze conducted the presentation of Certificate and Plague, and the decoration of Mrs Bolatito Ayorinde as the NET ADVOCATE of Abeokuta North Local Government by the HOLGA, the GM of Society for Family Health and the Executive Chairman respectively. Dr Duze also urged everyone to be available at their various houses for the collection of the nets during the period of exercise and adhere strictly to the laid Coronavirus precautions, take the vaccines when available and maintain general hygiene.

Thereafter the Chairman was mobilized and presented mosquito nets for his family.

Also the Vice Chairman, Hon.Ayoola Oluajo, demonstrated how to sleep inside the Insecticide Treated Nets.