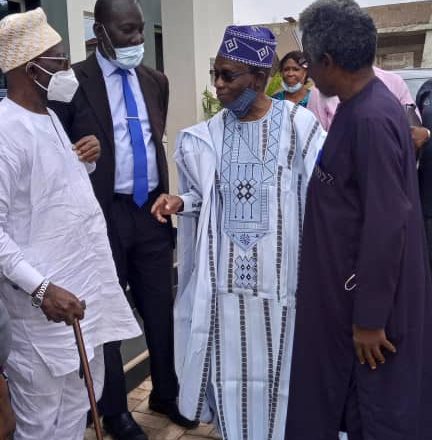 An elder statesman and renowned accountant in Nigeria, Chief M.Ola – Yusuf has said that the Federal Medical Centre , Idi Aba, Abeokuta would have suffered twenty years retrogression if the Medical Director, Prof Adewale Musa-Olomu was denied the second term chance.

Chief M.Ola Yusuf made the remarks when members of the Planning Implementation Committee (PIC) for the proposed University of Medicine and Medical Sciences paid a Congratulatory visit on the Medical Director.

Led by its Chairman and former Vice Chancellor of FUNAAB, Prof Olaiya Balogun, the high Egba Chief noted with regret that the Centre had gone through “trauma arising from self inflicted injury”

He therefore urged the hospital community to close ranks and henceforth work as a united family in the interest of the Centre.

Speaking earlier, the PIC Chairman Prof Balogun commended the Medical Director for the monumental achievements recorded in his first term.

” I cannot see any first generation public hospital that will push this Centre aside. It is not an exaggeration that FMC Abeokuta is more than a Teaching Hospital”, he had noted.

On the proposed University of Medicine and Medical Sciences, Prof Balogun said history will judge Prof Musa-Olomu ” positively because it is very rare for an individual to conceptualize the idea of transiting an FMC into a teaching hospital and vigorously pursuing the vision”

Prof Balogun noted with delight that the Committee was already “approaching the end of the tunnel” in getting the university established.

Responding, the Medical Director said he saw the three months that he was out of office as ” moments of trials from God” promising to play the role of a “father” at restoring lasting peace into the Centre.

He thanked his guests which included the former CMD of Olabisi Onabanjo University Teaching Hospital, Prof Alausa for their deep interest in the progress of the Centre.