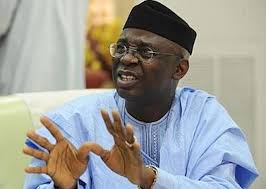 The senior pastor of the Citadel Global Community Church, formerly known as Latter Rain Assembly, Pastor Tunde Bakare, said his protest and campaign during the administration of Goodluck Jonathan was against the oppression of the poor,not subsidy removal.

He made this known during this year event of “The Platform”, an annual conference organised by Covenant Christian Centre in Lagos, on Thursday.

Pastor Bakare made the remark in answer to a public demand for a protest by Human Right group on the recent increase of the petroleum pump price.

He said,”I’m not an activist. I did not campaign against subsidy removal during Jonathan’s time; I campaigned against oppression of the poor. We give voice to the voiceless.”

Convener of the event, Pastor Poju Oyemade, hosted the virtual event in commemoration of the nation’s 60th independence anniversary.

Bakare argued that to put the country on the right track, it was imperative that the right people are in positions of leadership.

He said, “If you compare our performance with the nations that began this journey with us — nations like Singapore, Malaysia, Indonesia and South Korea — they’ve left us behind. We are still in the woods and are yet to come out.

“We thank God we are still a nation and we trust God that as we dialogue this afternoon and others bring their ideas to the table, those that are leading us will begin to put the best of us in strategic positions to move our nation forward.

“No nation anywhere can survive or embark on predictable progress when mediocres are in charge.

When asked what could be done to address the challenges bedevilling the country, he explained that there was a need for a change of orientation in every aspect of our lives.

He said, “The present government led by President Muhammadu Buhari announced three critical things as their focus or agenda as they were coming into power: security, diversified economy and fight against corruption.

“If you look at the security architecture, you will know something is wrong when our soldiers from the battle line are releasing videos of ‘we’re tired.’

“When he took the mantle of leadership and he relocated as it were, he took the power base of the military to the war front and we all had a sigh of relief that something was going to happen, but today, there’s so much bloodletting and bloodshed. I’m not sure we have really won the battle against terrorism in our country.”