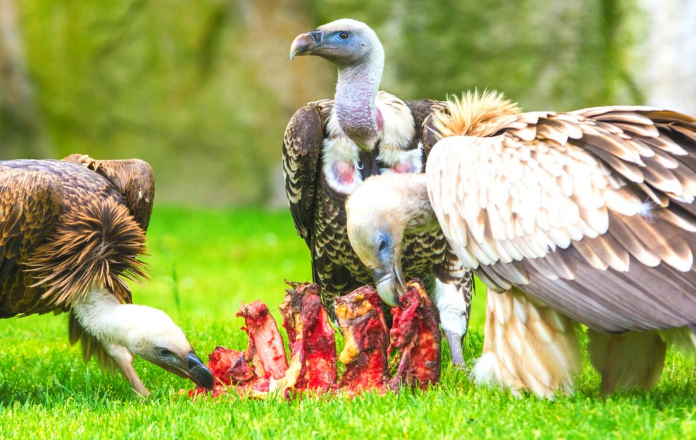 As the need to promote conservation message becomes more important in the face of the world battling the effect of COVID-19, and in order to prevent another pandemic through zoonotic disease, International and local NGOs embarked on vulture conservation awareness campaign in Africa.
The Nigerian Conservation Foundation (NCF), a leading environmental NGO in Nigeria commemorated the International Vulture Awareness Day (IVAD) across the nation through webinars hosted on five different days.
Dr. Joseph Onoja, Director of Technical programmes, NCF, in his presentation revealed that nature has bestowed on us vultures as environmental sanitary officers with a clean-up service worth $11,000 in a year.
He emphasised “Without vultures, humans are vulnerable to the spread of infectious diseases, because, in the absence of vultures, dogs and rats become the clean-up crew. The danger in this is that these animals are not equipped for such and are close to human population, exposing us to diseases.”
In his presentation, Mr. Aniekan-Abasi Emmah Uwatt, a conservation biologist and ornithologist, observed that human activities are the major drivers to the vultures’ threatened status. He added that the world could suffer from negligence if something drastic is not done to preserve the remaining vulture species in Nigeria.
He said “Imagine a world without vultures, it will lead to disease outbreaks such as anthrax; rabies; botulism; we would also have dirty environment with dead carcasses and foul smells.”
Another facilitator, Mr. Apeverga Paul Tersoo, Lecturer, Federal University Dutse, Jigawa State said that Vultures may not be very appealing by their looks, but these birds, also known as scavengers do the dirty jobs of cleaning our environment by taking care of carcasses and preventing the spread of diseases which in turn keeps the ecosystem healthy. The importance of these natural environmental cleaners cannot be over emphasized because the benefits we derive from them for free will cost us so much that it can only be imagined.
He said “A case study is seen in India where a crash in the vulture population was observed after the birds fed on carcasses of livestock that were treated with Diclofenac. The Indian white-rumped vulture was the most hit, with a decline rate of 99.9%. What followed was a surge in population of feral dogs that were infected with rabies from litters of carcasses as a result of the absence of our natural cleaners (the vultures). Consequently, an increase in human deaths from rabies nearly caused a public health catastrophe that saw the government of India spending about $34 billion to fight the spread of the disease.”
While presenting, Mallam Samaila Mohammed Alkali, Airport Wildlife Hazard Management Coordinator, Kano Airport said that aviation is a major threat to the survival of vultures. This is due to bird strike. Bird strikes occur when bird physically collide with aircraft. According to him, “Approximately 10,692 vultures were killed by Aircrafts between 2008 -2015, these may represent 1500 Vultures killed every year for the period of 7years.”
Meanwhile, in his presentation, Mr. Adewale Awoyemi, Head of Forest Centre, IITA Ibadan observed that the vanishing vultures have critical implications on human health and existence. The destruction of their habitats by deforestation is a threat to vulture conservation.
International Vulture Awareness Day (IVAD) is celebrated on the first Saturday of September every year to reflect on the importance of vultures and the essential role they play in a healthy ecosystem, and also to spread awareness about range of threat facing vultures and urge the people to take action and prevent extinction of the ecological bird species.
Nigeria is home to seven out of the eleven vultures that exist in Africa. They are Egyptian Vulture- Neophronpercnopterus (Endangered), Hooded Vulture – Necrosyrtesmonachus (Endangered),  White-backed Gypsafricanus (Endangered), White-headed – Trigonocepsoccipitalis (Vulnerable),  Ruppell’s Griffon – Gyprueppellii (Endangered),  Palm-nut Vulture – Gypohieraxangolensis (Least Concern)  and Lappet-faced Vulture -Torgostracheliotus – (Endangered).The only species that seems to be thriving in the country are the Hooded Vulture and Palm-nut Vulture.
Other facilitators, speakers and contributors at the webinars include Mariam Longe of TVC YourView; Peters Uduak, known as ‘Tito da fire’; Mr. Sulaiman Muhammed & Mr. Abubakar Ringim, lecturers, University of Dutse; Dr. Stella Egbe-Iruoje an environmental scientist; Mr. Mahmud Adedayo, Zonal Cord, NCF South-west office; Mr. Emmanuel Owan, Zonal Head, NCF Calabar office, Mr. Solomon Adefolu, EV-Life Project Lead among others.