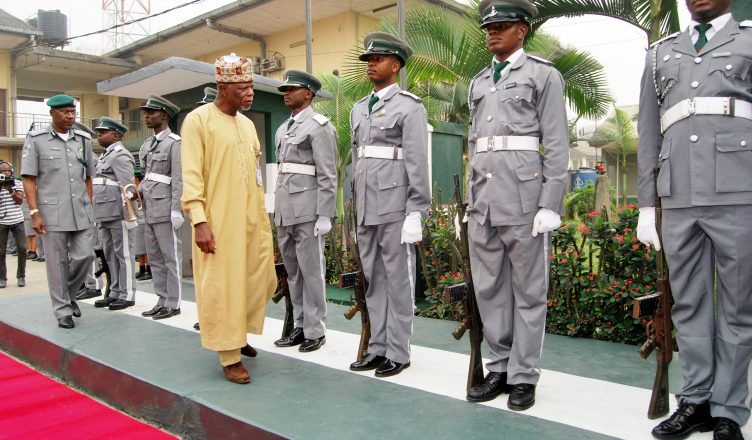 …focus and concentrate on your studies to be a good citizen.

The Nigeria Customs Service Ogun I Area Command has condemned the malicious allegations leveled against it by one Mr. Damilola Simeon Kehinde said to be the Chairman of NANS JCC and one Mr. Ogunrombi Gbemileke said to be National President of NAOSS, published online recently.
In a release made available by the Nigeria Customs Service spoke person,Ogun Command,Hammed Oloyede to news men,he described the allegation as misleading lies to create unnecessary tension in Ogun State and the Country.
He said,”The Command wishes to categorically debunk the allegation of Arms importation through Ogun State and hereby states that, there has never be a time where Arms and Ammunition are allowed to be Smuggled into the Country through Ogun state and it will not be allowed to be smuggled in whatever form. The Command had since fortified the numerous illegal routes through which contrabands are smuggled into the Country with aggressive patrols and had stepped up its anti-smuggling operations in the State to checkmate the nefarious activities of these enemies of the State.”
He also added that other allegation of Smuggling activities NANS claimed were taking place during the daytime is only in the imagination of the fabricator of the story. The release mentioned that the tightened security architecture in the state today by Customs and other Security Agencies will not permit Smuggling of Contrabands and other prohibited item at night time not to talk of during the day.

The release made it known that, “It is on record that since the resumption of the present Area Controller (CC Peter Kolo), the record of our achievements in the Command in both areas of revenue generation and anti-smuggling activities are being given out to the Press (media) on monthly basis in order for the public to be informed of our activities.
For the avoidance of doubt, the Command recorded over One Thousand, five hundred seizures of various contrabands and prohibited items ranging from foreign parboiled rice, foreign used vehicles, used shoes and clothing’s, Tomato Paste, Sativa (Marijuana), and petroleum products made for export since the beginning of the year. For instance seizures of Forty-six thousand, four hundred and ninety one (46,491) bags of foreign parboiled rice were made in the Command between the moths of January 2021 to August 2021. About 20 suspects are currently undergoing trial for various Smuggling offenses in the Federal High Court, Abeokuta, Ogun State.”
The Customs advised the students,” to focus and concentrate on their studies and school activities so that they graduate in record time and be better citizen tomorrow instead of offering and allowing themselves to be used as a tools for blackmail of an individual and Government Institution. The Service wishes to implore them to channel their energy towards educating their fellow members of various communities on dangers inherent in Smuggling activities.”